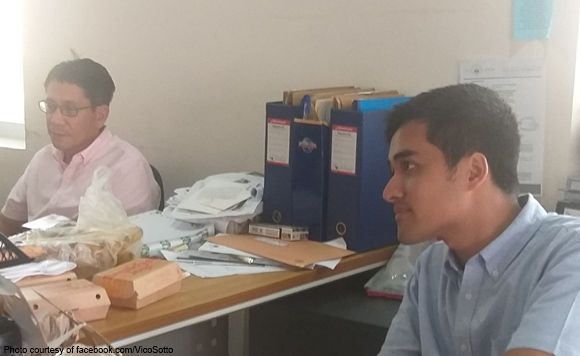 0 2,124
Share
Want more POLITIKO News? Get the latest newsfeed here. We publish dozens and dozens of politics-only news stories every hour. Click here to get to know more about your politiko - from trivial to crucial. it's our commitment to tell their stories. We follow your favorite POLITIKO like they are rockstars. If you are the politiko, always remember, your side is always our story. Read more. Find out more. Get the latest news here before it spreads on social media. Follow and bookmark this link. https://goo.gl/SvY8Kr

They are sure winners, so why stall the proceedings?

Newbie contender Vico Sotto has emerged a clear winner based on the partial results of the Pasig City mayoral race as early as Monday night, but unlike other cities in Metro Manila, it is yet to be made official by the local board of canvassers.

Sotto’s excitement slowly morphed into impatience and curiosity after he and returning Congressman Roman Romulo has been made to wait since dawn.

LWe arrived here around 2am. It is now 9:03am. WE ARE STILL WAITING FOR OUR PROCLAMATION (official announcement that we are the winners),” Sotto said.

He sees no point to postpone the announcement further, as the tally already factors in 96 percent of city votes where he enjoys a 90,000 lead.

They already asked for a lower threshold to make the proclamation, but no feedback has been given since.

“We can wait. BUT we are asking the COMELEC to infotm us WHY there is such a delay,” Sotto said.

“If we just need the go signal from the Regional Office, what is taking so long? We are not accusing anyone of anything. We just want to know the reason.”

Now, they sit and wait some more.