In denial pa rin! Erap can’t believe he lost to Isko… even in his own barangay 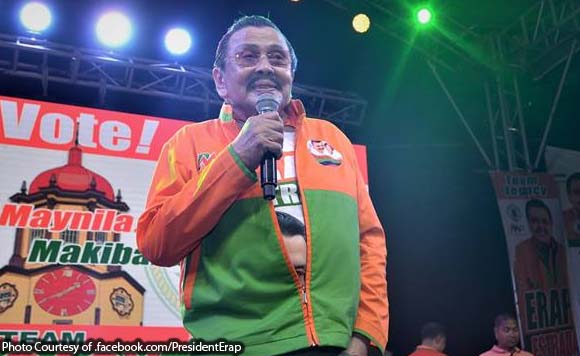 0
679
Want more POLITIKO News? Get the latest newsfeed here. We publish dozens and dozens of politics-only news stories every hour. Click here to get to know more about your politiko - from trivial to crucial. it's our commitment to tell their stories. We follow your favorite POLITIKO like they are rockstars. If you are the politiko, always remember, your side is always our story. Read more. Find out more. Get the latest news here before it spreads on social media. Follow and bookmark this link. https://goo.gl/SvY8Kr

In an interview with ABS-CBN News Tuesday, Estrada said he’s still in disbelief over his defeat to Moreno considering several voter preference surveys showed he was the leading mayoralty candidate.

The mayor said he also couldn’t understand why Moreno got more votes than him in his own barangay.

Honey Lacuna, Moreno’s running mate, is set to win another term as vice mayor. She got 382,705 votes compared to 260,489 for former Congressman Amado Bagatsing.

Despite Moreno’s lead, Estrada clarified he isn’t conceding the mayoralty race yet. He said he believes he became someone’s “project,” with people ganging up on him and his family.

The 2019 polls saw the fall of the Estrada dynasty, with several family members losing their electoral bids. Joseph’s daughter Jerika lost as councilor in Manila’s fourth district while his granddaughter Jel Estrada lost to Francis Zamora in the San Juan mayoralty race.

Meanwhile, based on partial and unofficial tally of votes, neither of Estrada’s sons Jinggoy and JV will be elected senator.