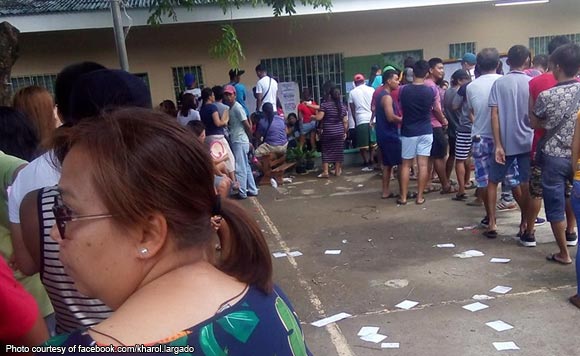 0 2,635
Share
Want more POLITIKO News? Get the latest newsfeed here. We publish dozens and dozens of politics-only news stories every hour. Click here to get to know more about your politiko - from trivial to crucial. it's our commitment to tell their stories. We follow your favorite POLITIKO like they are rockstars. If you are the politiko, always remember, your side is always our story. Read more. Find out more. Get the latest news here before it spreads on social media. Follow and bookmark this link. https://goo.gl/SvY8Kr

The conduct of the elections in Metro Manila on Monday was generally peaceful and orderly, according to Maj. Gen. Guillermo Eleazar, National Capital Region Police Office (NCRPO) chief.

Eleazar told the Philippine News Agency (PNA) that their long preparation for the midterm national and local polls has paid off.

“No untoward incident (was) reported and it’s peaceful so far. I think it is because of our coordination with the Commission on Election and other concerned government agencies,” said Eleazar after inspecting polling centers in different schools in the NCR.

He, however, reported that various police operations have resulted in the arrest of 135 persons allegedly engaged in vote buying activities.

Eleazar said PHP518,000 in cash have been confiscated from the suspects, including 60 persons in Makati City and 54 in Quezon City.

The suspects will face charges for violation of Section 261 (a) in relation to Section 262 (vote buying and/or selling) of the Omnibus Election Code, according to the NCRPO chief.

Eleazar said 403 individuals have been also arrested for violating the liquor ban which started on Sunday and will end Tuesday (May 14).

Around 16,000 policemen have been deployed to secure the conduct of the elections in Metro Manila.

“This (personnel deployment) is not just in polling centers or canvassing areas but also to maintain our anti-criminality efforts. There’s no room to be complacent. The criminal elements might strike anytime, anywhere if they opportunity,” Eleazar said.

Meanwhile, peaceful and orderly elections have also been recorded at the Ramon Magsaysay High School (RMHS) in Manila, one of the largest polling centers in Metro Manila.

Police Captain Philipp Jose Ines, team leader of the PNP squad deployed at the RMHS, said they maintained full alert status even if there are no security threats in the area.

Ines said 19,535 voters are registered at the RMHS but usually not all of them are expected to cast their votes.

“Maraming mga pagkakataon na yang mga yan ay may iba’t-ibang kadahilanan na hindi sila makaboto, ang mahalaga lang majority of them ay makapagcast ng vote (Many of these registered voters have various reasons why they won’t be able to vote, the important thing is majority of them can cast their votes),” he said.

Latest count from the Bureau of Fire Protection (BFP) and private rescuers showed a total of 351 persons have been given medical attention, mostly due high blood pressure.

He said due preparation was conducted to ensure the safety of the conduct of polls in their school.

“Lahat ng preparation ginagawa (All necessary preparations were conducted),” he said. (With reports from EJ Roque/PNA)