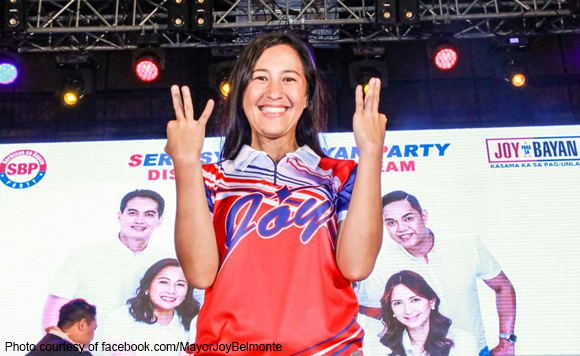 Quezon City Vice Mayor Joy Belmonte is grateful to remain as the candidate to beat in the mayoralty race as the campaign season draws to a close.

Crisologo obtained 30 percent of votes from almost 8,000 registered voters who participated in the survey, while Mathay received three percent.

Belmonte attributed her lead to residents’ confidence in her, as well as the support that came from various groups.

“Securing the lead in this surveys is an important milestone especially we’re already in the crucial days just before the local elections. I’m grateful that the people consistently choose me as their next leader in Quezon City,” she said.

Belmonte said the endorsements from President Rodrigo Duterte, his daughter, Davao City Mayor Sara Duterte, and the Iglesia Ni Cristo, also helped solidify her stature as the leading candidate in the mayoralty race.