That’s what friends are for: Kris Aquino endorses Junjun Binay 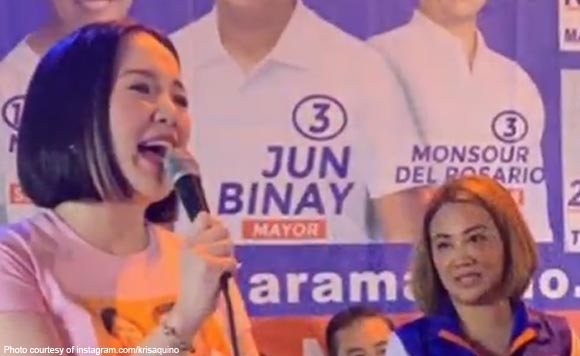 0 2,736
26
Want more POLITIKO News? Get the latest newsfeed here. We publish dozens and dozens of politics-only news stories every hour. Click here to get to know more about your politiko - from trivial to crucial. it's our commitment to tell their stories. We follow your favorite POLITIKO like they are rockstars. If you are the politiko, always remember, your side is always our story. Read more. Find out more. Get the latest news here before it spreads on social media. Follow and bookmark this link. https://goo.gl/SvY8Kr

Kris Aquino has thrown her support behind the comeback bid of former Makati City mayor Junjun Binay to the city hall.

Aquino showed which Binay’s side she is on when she appeared at a campaign rally for Junjun earlier this week.

The actress elicited shrieks from the crowd as she joined the Binay siblings: Junjun, Nancy and Anne, on stage. She was wearing a shirt with the images of Nancy, who is running for reelection as senator, and Junjun.

In an Instagram post, Aquino said her appearance at Junjun’s campaign rally was for Anne, her close friend.

Junjun is running against another Binay sibling, Abby, for mayor.

“Advanced happy birthday @annebinay & also to Senator @nancybinay. Tonight was for you, anne… I hope I made you & your mom feel my genuine & lifelong LOVE,” she said.