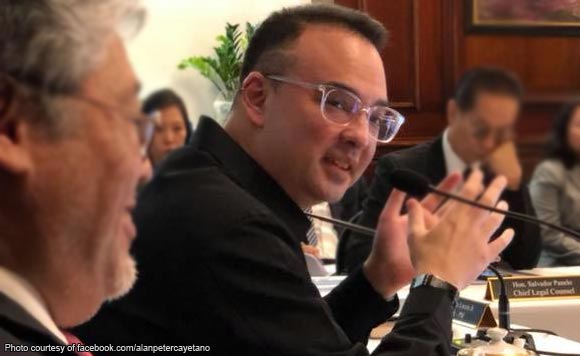 The Commission on Elections (Comelec) has dismissed the petition to cancel the certificate of candidacy (COC) of former Foreign Affairs Secretary Alan Peter Cayetano for congressman of Taguig-Pateros district.

The Comelec second division, in a recent resolution, said Cayetano did not commit material representation concerning his residency.

The former Secretary declared his residence as 209 Paso St., Brgy. Bagumbayan in his COC.

Petitioner Leonides Buac sought to disqualify Cayetano from running because his family home was now located at 353-A Two Serendra in Fort Bonifacio.

Cayetano’s wife Lani indicated the Fort Bonifacio residence in her own COC for congresswoman of Taguig’s first district.

Buac said Cayetano committed misrepresentation because he’s allegedly living with Lani at Fort Bonifacio and not at Brgy. Bagumbayan, like he indicated in his COC.

The Comelec, however, said Cayetani “cannot be considered to have lost that domicile” in Bagumbayan despite moving his family home to Fort Bonifacio.

“In view of the foregoing, Respondent not having abandoned his domicile in Barangay Bagumbayan, correctly declared that his residence is such address and no material representation that is false can be imputed for such an act nor for his act of declaring himself eligible for the office sought to be elected to as his domicile remains to be Barangay Bagumbayan in the 1st District of Taguig-Pateros,” the Comelec ruled.

Continue Reading
353-A Two SerendraCertificate of CandidacyCommission on ElectionsFort BonifacioPaterosTaguig
0
Share
Politiko would love to hear your views on this...
Trending News
More Stories