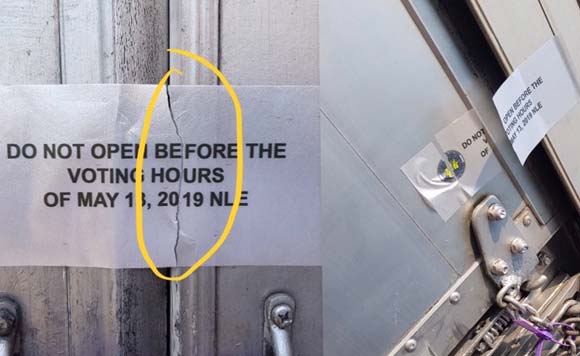 0 494
Share
Want more POLITIKO News? Get the latest newsfeed here. We publish dozens and dozens of politics-only news stories every hour. Click here to get to know more about your politiko - from trivial to crucial. it's our commitment to tell their stories. We follow your favorite POLITIKO like they are rockstars. If you are the politiko, always remember, your side is always our story. Read more. Find out more. Get the latest news here before it spreads on social media. Follow and bookmark this link. https://goo.gl/SvY8Kr

Is there an attempt to tamper with the ballots in Pasig City ahead of the May 13 elections.

Former Valenzuela City councilor Shalani Soledad has revealed the questionable state that some ballot boxes arrived in Pasig City ahead of the polls.

Soledad, the wife of Pasig congressional candidate Roman Romulo, raised her concern about a number of ballot boxes in a tweet addressed to Commission on Elections spokesperson Director James Jimenez.

The former councilor asked if it was normal for the ballot boxes, which arrived in Pasig Friday, to have their paper seals broken or ripped.

The print on the paper seals read: “Do not open before the voting hours of May 13 NLE (national and local elections).”

In response to Soledad’s tweet, Jimenez said the Comelec will inquire into the matter.

Romulo is running against incumbent Congressman Richard Eusebio, whose family has controlled Pasig City over the last 20 years.

Hi @jabjimenez When the ballot boxes arrived this morning, it was in this state. See attached photo. Is this the norm? Thank you. pic.twitter.com/s5RNrYKqsL