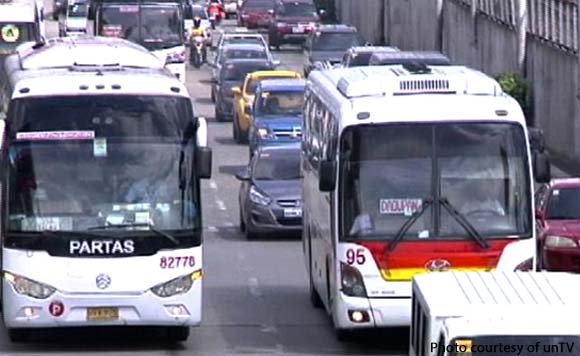 0 1,337
Share
Want more POLITIKO News? Get the latest newsfeed here. We publish dozens and dozens of politics-only news stories every hour. Click here to get to know more about your politiko - from trivial to crucial. it's our commitment to tell their stories. We follow your favorite POLITIKO like they are rockstars. If you are the politiko, always remember, your side is always our story. Read more. Find out more. Get the latest news here before it spreads on social media. Follow and bookmark this link. https://goo.gl/SvY8Kr

Nebrija said franchise routes of provincial buses should be reduced as a result of the closure of bus terminals along Edsa.

“We need to cut if we will be closing down the terminals. We do not want that up to the last minute we will be doing this once we had already shut them down,” Nebrija said.

The MMDA is now doing a dry run of the provincial bus ban since April 22 wherein bus operators are urged to use the interim terminals located in Valenzuela City and the City of Santa Rosa in Laguna. The agency is seeking to remove all 47 bus terminals along Edsa by June.

The Department of Transportation is building the integrated bus terminals in Bulacan and Taguig City for public utility buses coming from the northern and southern provinces, respectively.

The P2P buses are intended to transport passengers from provinces that carry heavy luggage going to Metro Manila.

He said they are also planning to extend the routes of city buses to the interim terminals in order to ensure ease of travel among commuters.

“We want to ensure the availability of city buses that will pick up passengers from the interim terminals before we conduct the dry run on the use of the terminals,” Garcia said.

The MMDA will meet with officials of the Land Transportation Franchising and Regulatory Board (LTFRB) next to finalize details for the full implementation of the policy particularly the number of P2P and city buses that will be deployed with their fares and routes, reduction of provincial bus franchise routes as well as the extension of city bus routes.

The LTFRB has the authority to approve or revise the routes of the buses while the MMDA will handle the enforcement.

The MMC, MMDA’s policy-making body consists of 17 Metro Manila mayors, has approved MMDA Regulation No. 19-002, prohibiting the issuance of business permits to public utility vehicle terminals and operations along Edsa.

Once the business permits are revoked, the actual closure of the terminals could be implemented by the concerned local government units which have jurisdiction over the terminals.