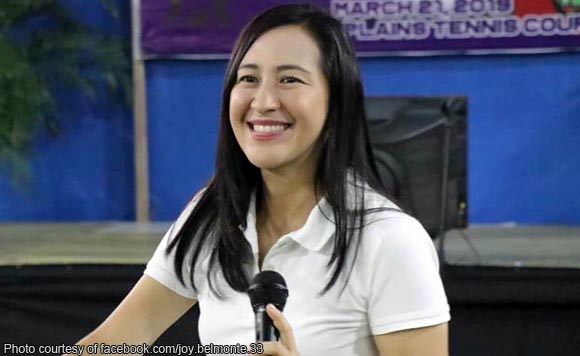 0 543
Share
Want more POLITIKO News? Get the latest newsfeed here. We publish dozens and dozens of politics-only news stories every hour. Click here to get to know more about your politiko - from trivial to crucial. it's our commitment to tell their stories. We follow your favorite POLITIKO like they are rockstars. If you are the politiko, always remember, your side is always our story. Read more. Find out more. Get the latest news here before it spreads on social media. Follow and bookmark this link. https://goo.gl/SvY8Kr

Quezon City vice mayor Joy Belmonte has vowed not to be complacent despite consistently topping surveys on mayoralty bets in the city.

In a statement Tuesday, Belmonte thanked her supporters after she cemented her lead in the non-commissioned survey conducted by the data analytics firm iSurvey.

“Surveys like this inspire me to work harder so that I can be the leader the people want — the leader who will bring development and progress to the residents of Quezon City,” she said.

Results of the iSurvey poll showed Belmonte with a 63 percent voter preference over Rep. Bingbong Crisologo and Ismael Mathay III, who got 32 percent and three percent, respectively.

The iSurvey poll was conducted throughout Quezon City from April 19 to 25, with 15,000 registered voters as respondents.

Given the chance to be Quezon City’s next mayor, Belmonte said she will “bring progress and growth” to the city.