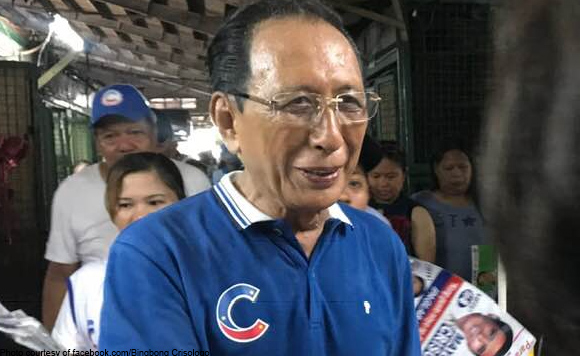 A disqualification case was filed against Quezon City mayoralty candidate, Rep. Vincent “Bingbong” Crisologo at the Commission on Elections (Comelec) on Monday.

“If a person is convicted of a crime penalized by more than 18 months or a crime involving moral turpitude, such person is disqualified from being a candidate and to hold any office,” Zamora said in a five-page petition.

“Premises considered, it is respectfully prayed to the Honorable Commission, after due hearing, disqualify Vincent Crisologo as a candidate for the position of mayor of Quezon City,” she added.

The petitioner has included documents from the Malacañang Records Office showing that the executive clemency granted by former President Ferdinand Marcos was only a “conditional pardon” dated January 14, 1981.

Zamora noted that a Certification from the Board of Pardons and Parole revealed that there are no other “official records or documents” in their custody, except for an index card, showing that Crisologo was granted a “conditional pardon”.

“Nothing in the Conditional Pardon granted to Respondent removes his incompetency from running for and holding public office,” the petition stated.

“And without such an express restoration, Respondent must be deemed disqualified from being a candidate or holding public office,” it added.

In 1970, Crisologo was convicted for one case of arson and a second case of arson with homicide for the burning of Barangay Ora Centro and Ora Este in Bantay, Ilocos Sur.

Crisologo was then sentenced with double life imprisonment in a criminal court in La Union, for which he served time in jail.

He was eventually granted pardon by Marcos and has since served as councilor and congressman of Quezon City. (PNA)