QC, Pasay tagged as ‘areas of concern’ in May polls 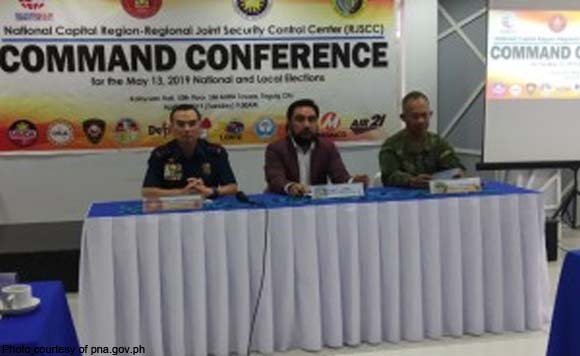 0 811
Share
Want more POLITIKO News? Get the latest newsfeed here. We publish dozens and dozens of politics-only news stories every hour. Click here to get to know more about your politiko - from trivial to crucial. it's our commitment to tell their stories. We follow your favorite POLITIKO like they are rockstars. If you are the politiko, always remember, your side is always our story. Read more. Find out more. Get the latest news here before it spreads on social media. Follow and bookmark this link. https://goo.gl/SvY8Kr

MANILA — While there are no election hotspots in Metro Manila, Quezon City and Pasay were classified as areas of concern for the May 13 elections.

National Capital Region Police Office (NCRPO) head, Major Gen. Guillermo Eleazar said this came after incidents of election related violence where a barangay chairwoman running for a congressional seat in Quezon City was killed in an attack while a barangay chairperson in Pasay was wounded in another incident.

“We considered these as areas of concern but there is no reason for them to be placed under Comelec (Commission on Elections) control. So, all of 16 cities and municipality are considered to be peaceful, manageable in terms of the coming election,” Eleazar told reporters after the command conference with officials of Comelec, NCRPO and Joint Task Force-National Capital Region (JTF-NCR) of the Armed of the Philippines (AFP) held in Taguig City.

Eleazar said the NCRPO has the lead role in law enforcement operations aimed at dismantling of criminal gangs, other criminal elements and Private Armed Groups; as well as the arresting and filing of cases against target personalities and organizations.

Eleazar, said a total of 15,000 police personnel will be deployed in Metro Manila.

“We will be deploying around 15,000 personnel. This is not just in polling centers or canvassing areas but also to maintain our anti-criminality efforts,” said Eleazar.

Eleazar ordered the five police district directors in the metropolis to monitor political developments in areas where election-related violence occurred in the past.

“The joint task force NCR will just support the Comelec ensuring the election is credible and honest, with the preparations done by the JSCC (Joint Security Control Center). I guess and I prayed that we are already prepared. The elaborate preparation of the PNP will only support them, will just provide area security,” Zaragoza told reporters.

Atty. Temi Lambino, Comelec NCR Regional Director, said the security preparations and plans are all set for midterm election on May 13.