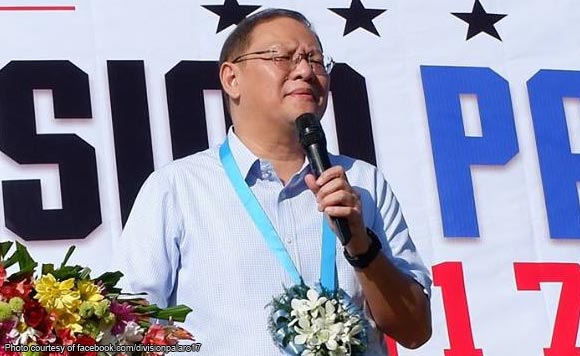 0 1,115
Share
Want more POLITIKO News? Get the latest newsfeed here. We publish dozens and dozens of politics-only news stories every hour. Click here to get to know more about your politiko - from trivial to crucial. it's our commitment to tell their stories. We follow your favorite POLITIKO like they are rockstars. If you are the politiko, always remember, your side is always our story. Read more. Find out more. Get the latest news here before it spreads on social media. Follow and bookmark this link. https://goo.gl/SvY8Kr

The National Capital Region Police Office (NCRPO) is now investigating the alleged withdrawal of support of the Marikina City government to its local police.

“I have reported this to the PNP chief (Gen. Oscar Albayalde). It will then be referred to the SILG (Secretary of the Interior and Local Government Eduardo Año). Hopefully, the DILG will conduct a parallel investigation while our probe is ongoing,” NCRPO head, Maj. Gen. Guillermo Eleazar, told the Philippine News Agency (PNA) in a phone interview.

Mayor Marcelino Teodoro allegedly ordered the city government to withdraw its support for the police after the Philippine National Police (PNP) failed to ask his opinion on the appointment of a new city police chief.

PNP chief Gen. Oscar Albayalde said Marcelino ordered the reduction of gas allowance for the city’s patrol cars and the tickets for city ordinances and cut hotline numbers for peace and order operations.

“This is all part of our crime prevention effort and crime solution effort so as a mayor, why would you remove [the hotline numbers] so I think it’s very unprofessional. That is very childish of him,” Albayalde told reporters on Tuesday.

Marikina Police officer-in-charge, Col. Redrico Maranan, confirmed Albayalde’s statement based on the document submitted to the office of Regional Director of NCRPO obtained by the PNA.

“Aside from the reduction in gas allocation and the recall of Ordinance Violation Receipt (OVR) and Traffic Violation Receipt (TVR) tickets used in enforcement of traffic laws and city ordinances), we were also informed that we are no longer allowed to attend the flag-raising ceremony so we conduct our own flag-raising,” Maranan told PNA in a phone interview.

Maranan said he has already met with the local chief executive last month, noting that the latter said he should have been informed of the former’s appointment.

“Nag-usap kami ni Mayor, nung first meeting namin (I talked to the Mayor during our first meeting). I’m OIC for the election period and there were police officials who were promoted and I was assigned at Marikina. I need to function as acting chief of police,” said Maranan.

Maranan noted that they will continue with their mandate as police despite the situation.

The Marikina acting police chief stressed that he is ready to thresh out issues with the mayor but it has yet to be set because of the latter’s hectic campaign schedule.

Maranan also added that he continues to update Teodoro on the situation around the city through text messages.

Meanwhile, DILG spokesperson Undersecretary Jonathan Malaya said changes in police leadership in cities and provinces, especially during the election period, are done in the exigency of the service.

He said in order to avoid a leadership vacuum, the PNP may designate a temporary chief of police (COP) in order not to disrupt the services of the PNP in a particular local government unit.

“RA 6975 does not require the concurrence of the local chief executive in placing a COP in an acting capacity. As deputized representatives of the Napolcom in their territorial jurisdictions, local chief executives must adhere to policy decisions of the Commission it deems exigent,” he said in a text message.

“May we remind all local chief executives that when benefits and allowances for the police in their area of jurisdiction are embodied in the appropriate appropriation ordinances, they are left with no discretion but to implement it. Disbursing these benefits becomes a ministerial duty for them,” he added.

DILG Secretary Eduardo Año said he will verify the specific details and will require the mayor to explain the issue.

“If it is true, what he has done would have serious implications in the peace and order functions of our police officers in Marikina City,” Año said when sought for a comment.

If proven true, Año said Teodoro may be stripped of police powers.

What withdrawal of support?

In a series of statements, Teodoro denied withholding any support to the local police and advised instead the PNP to be more circumspect in releasing statements.

“This is an intrigue brought about by local dynamics blown out of proportion. The PNP chief should have at least verified the claims relayed to him before rushing into judgment. (I am) open to a fair and impartial probe. (I am) open to the opportunity to present the facts, and show that what has been provided by the city government in support of the Marikina PNP is more than what is legally required,” Teodoro said.

“As a matter of fact, PHP130 million has been allocated by the city government to construct the PNP headquarters. Likewise, four public safety centers are in the works for the benefit and utilization of law enforcers. Other logistical needs such as patrol cars and firearms have also been procured,” he added.

Regarding the issue on the recall of OVRs and TVRs, Teodoro said he decided to limit it to the city enforcers.

This came after several reports indicated that PNP personnel deputized for this purpose have been more focused on getting their share of their collection of fines or their 20 percent incentive per apprehension, rather than fulfilling their mandate on crime prevention in their areas of responsibility.

Teodoro, meanwhile, clarified that he only wanted to make sure that operating expenses of the local police are equally shared by the PNP and the city government, including gasoline expenses.

“It is a matter of judicious spending in order that activities and programs relating to law enforcement in the city will be met with efficiency. It should be reminded that we, the city, have given more to the PNP Marikina in terms of logistics, and have even made plans for PNP building. So to say that we have withdrawn support is farfetched,” the Marikina Mayor said.

On the matter of lack of notice on Maranan’s appointment, Teodoro cited a provision of RA 7160 and the DILG Act (RA 6975) as amended that expressly states “that the City Mayor has operational supervision and control of PNP units within his jurisdiction.”

“It is a matter of courtesy and respect and observance of the law that I should at least be notified,” he added. (PNA)