A baby box for each birth: Taguig copies Finland’s model for infant care 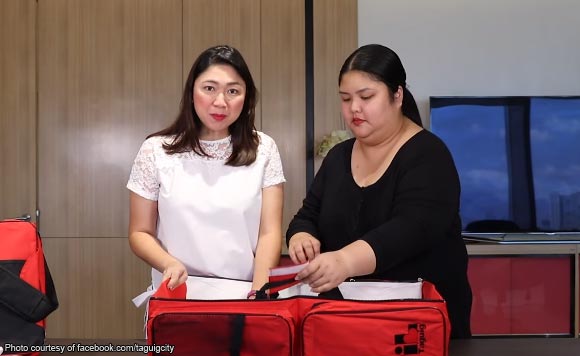 The city government of Taguig has taken a page off Finland in improving maternal and infant healthcare.

The local government last month launched the “Infant Care Project,” featuring the baby box Finland is known for. Taguig’s version is a 3-in-1 foldable baby bag that can transform into a diaper bag, a crib or a changing pad.

During the Buntis Congress held on March 27, some 110 mothers received the baby bag filled with soap, alcohol, baby oil, wipes and diapers.

Mothers who just gave birth can claim their own foldable baby bags after completing the registration of their newborns.

However, they should have met the following requirements to be eligible for the baby bag:

1) completing four prenatal checkups: one each during the first and second trimester and two in the last trimester;

(2) getting the appropriate tetanus vaccine injections;

(3) delivering the baby in a licensed facility, such as a hospital, certified lying-in center or Super Health Center;

(4) going through a postnatal checkup;

(5) having the baby immunized with BCG and Hepatitis B vaccines

From Finland to Taguig: 'Baby bags' for each new birth in the probinsyudadTaguig City launched the “Infant Care Project” last March 27, bringing a helpful tool against maternal and infant mortality to our side of the Metro.The program centers on a tool modeled after Finland's touted baby box, which has helped new moms and babies in that European country since 1938 and lowered infant mortality there in the long term.Taguig’s version is a 3-in-1 foldable baby bag that can transform into a diaper bag, a crib or a changing pad. Several compartments of the baby bag given away free of charge are filled with soap, alcohol, baby oil, wipes and diapers.Some 110 mothers received free units at the launch, a highlight of the Buntis Congress event held at Lakeshore Hall in Barangay Lower Bicutan.The Buntis Congress is a biannual gathering of soon-to-be mothers and postpartum mommies to give them the proper knowledge on safe motherhood, breastfeeding, immunization and family planning. On regular days, the item can be claimed after a baby is delivered in a medical facility and the parents get birth registration. Before the delivery, too, the mother must have undergone some steps. Below is the list of requirements to avail the baby bag compliments of the probinsyudad:1) completing four prenatal checkups: one each during the first and second trimester and two in the last trimester;(2) getting the appropriate tetanus vaccine injections; (3) delivering the baby in a licensed facility, such as a hospital, certified lying-in center or Super Health Center; (4) going through a postnatal checkup;(5) having the baby immunized with BCG and Hepatitis B vaccines; and(6) getting a birth registration.Except the last item, all the steps alleviate the risk of maternal and infant mortality, a bid to further lower the numbers for Taguig City.Vanessa Acompañado, a 34-year-old working mom, was among the Taguigeño mommies who received a baby bag during the Buntis Congress.She just gave birth to already her third child — Luke Andy — last March 2.“This baby bag is truly a huge help for mothers like me,” explained Vanessa, who is currently on maternity leave to focus all her attention on her new child. “I am now worrying less because I can turn it into a portable crib where he can be safe while I do household chores or turn it into a bag where I can organize his things when we go out.”In the Buntis Congress, the participants also availed of free HIV and AIDS counseling, blood typing, dental services and nutrition counseling. There was a PhilHealth booth for their inquiries.The Infant Care Project and Buntis Congress are not the only programs of the probinsyudad zeroing in on mothers and babies. In 2015, the Department of Health dubbed the city-owned Taguig-Pateros District Hospital (TPDH) “Mother-Baby Friendly,” recognizing its outstanding implementation of a breastfeeding policy, staff training on lactation management, strong link with the community to sustain breastfeeding, and compliance with Executive Order No. 51, also known as the Milk Code, and Republic Act No. 7600 or Rooming-In and Breastfeeding Act of 1992.In the same year, the Taguig City Human Milk Bank was launched, the third established by a local government unit in the country. It has helped a total of 473 breastmilk beneficiaries and recruited more than 2,989 breastmilk donors. Some 14,669 Taguigeño babies have also benefited from Taguig City’s free newborn screening that ensures the early detection of conditions in newborn babies that need immediate treatment. Taguig's PhilHealth-accredited Super Health Centers in Barangays North Signal, Central Bicutan and Napindan also offer free lying-in services for pregnant women."The city administration is well aware of the struggles of every soon-to-be and new mother, and of every human born. Through this Infant Care Project and our many other programs in infant and maternal care, we offer our solidarity with them. Ultimately, we want the same thing: a more caring environment for the mothers and infants in our city,” Taguig City Mayor Lani Cayetano said.For those who wish to avail of the baby bags, you may call Julie or Ana at (02) 640-1066.#ilovetaguig#ThinkBigTaguig