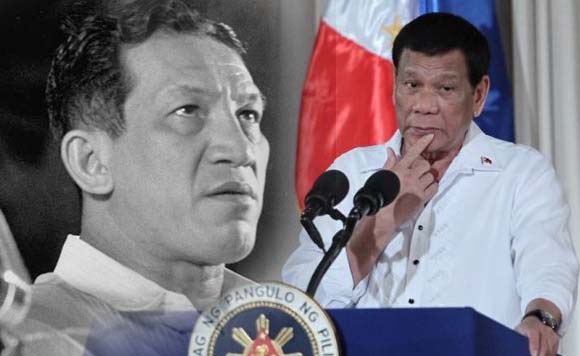 If he won’t be killed in a firing squad at Luneta ala- Jose Rizal, President Rodrigo Duterte wants to die “standing” the way legendary Manila mayor Arsenio Lacson did in allegedly scandalous circumstances on Holy Thursday 57 years ago.

Duterte said he’d rather die in ecstasy instead of a nightmare as he weighed his exit options amid fears he would be targeted by drug lords once he stepped down from office three years from now.

“If I die, if they hang me or put me in jail, that’s okay. I don’t have a problem with that. If they ask me to pay, if they sentence me with death, it’s okay. But I prefer the firing squad just like Rizal.

At least there will be two of us. Kill me in Luneta. I would prefer to die that way rather than while having a nightmare in my sleep. Or I might die from what (former senator Kit Tatad) said I had (kidney problems),” said Duterte in a speech in Bukidnon.

“If not, the nice thing would be to die standing. That’s a good way to die. Just like Lacson, Mayor Lacson.What was his illness? Tsuk tsak.

That’s what it’s called,” he added. Duterte was alluding to rumors that Lacson died while in the middle of having sex with a bombshell actress.

Lacson, who was Manila’s first elected mayor who served from 1951
to1962, is revered for being a “good man with a bad mouth” and a taste
for alocohol and women.

Inquirer columnist Amado Doronila said Lacson was an amateur boxer “which gave him the capacity to beat bullies who included would-be Philippine President Ferdinand Marcos, who once declined Lacson’s challenge to a fistfight over their rivalry for women.”

The New York Times reported that the “colorful” mayor “died of a stroke this afternoon in his private hotel suite… physicians initially attributed his death to a heart attack.” He was 49 when he died and was reportedy poised to run for president.