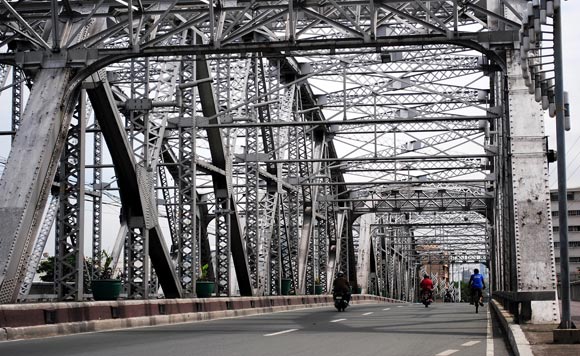 0 1,278
Share
Want more POLITIKO News? Get the latest newsfeed here. We publish dozens and dozens of politics-only news stories every hour. Click here to get to know more about your politiko - from trivial to crucial. it's our commitment to tell their stories. We follow your favorite POLITIKO like they are rockstars. If you are the politiko, always remember, your side is always our story. Read more. Find out more. Get the latest news here before it spreads on social media. Follow and bookmark this link. https://goo.gl/SvY8Kr

The Quirino Bridge II or the Concordia Bridge along Quirino Highway in Paco, Manila is now fully operational after the structure’s newly-reconstructed northbound direction was opened to motorists by the Department of Public Works and Highways (DPWH) on Thursday.

“A six-lane Quirino Bridge II can now be used by motorists going in and out of southern part of Manila with the completion of three southbound lanes last October and now the three northbound lanes,” Villar said.

The DPWH chief noted that the reconstruction of the northbound lanes was halted to make way for the Christmas rush, but was completed by DM Consunji, Inc. within a month from February until March 2019.

Quirino Bridge II, underneath the Metro Manila Skyway Stage 3 Project in Manila, was temporarily closed last year and reconstruction of its southbound lane was done from June to October 2018.

The bridge is a 24-linear meter single-span road that forms part of Circumferential Road II connecting the cities of Manila, Pasay, and Makati to the rest of central and eastern side of Metro Manila including the cities of Quezon, Mandaluyong, Pasig, San Juan and Marikina, and the province of Rizal. (PNA)