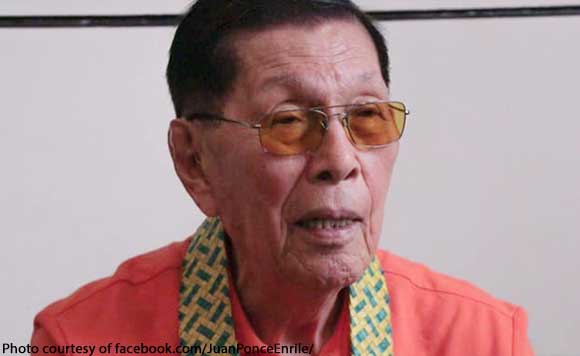 0 703
25
Want more POLITIKO News? Get the latest newsfeed here. We publish dozens and dozens of politics-only news stories every hour. Click here to get to know more about your politiko - from trivial to crucial. it's our commitment to tell their stories. We follow your favorite POLITIKO like they are rockstars. If you are the politiko, always remember, your side is always our story. Read more. Find out more. Get the latest news here before it spreads on social media. Follow and bookmark this link. https://goo.gl/SvY8Kr

Puwersa ng Masang Pilipino (PMP) Senatorial candidate Juan Ponce Enrile urged the Metropolitan Manila Development Authority (MMDA) to reconsider its decision to close down all provincial bus terminals on EDSA and transfer them to areas outside of Metro Manila.

Enrile said commuters from the North would be greatly inconvenienced by the move to shut down all provincial bus terminals on EDSA.

He said thousands of provincial commuters from Laguna, Cavite, Batangas, Quezon, Bicol and other provinces in the South would likely be suffering the same inconvenience of transferring from one bus to another before reaching their final destination.

“One of the primary complaints of the citizens in Bicolandia is the additional burden in terms of time, money, and comfort of the transfer in bus terminals from commuters from the South,” said Enrile.

“We have to take into account the struggle this would cause on the part of commuters. May libo-libo tayong pasahero na madaming bitbit at gusto pa sanang magtipid, pero dagdag-perwisyo pa dala natin sa kanila,” Enrile lamented.

The MMD announced that provincial buses from the South coming from Laguna, Quezon, and Bicol would be dropped off in Sta. Rosa, Laguna.

They would then transfer to Metro Manila buses to their various destinations.

Buses from the North will drop passengers at a terminal in Valenzuela and transfer to Metro Manila buses.

The MMDA said a dry run of the plan was scheduled after the Holy Week and its full implementation would be set in June before the opening of classes.

“The MMDA needs to have a thorough discussion with commuters, bus companies, and provincial transport services to see if there are less drastic measures that could be explored. If they really must close the EDSA terminals, they need to make sure that the alternative terminals to ferry provincial commuters in and around Metro Manila are completely operational,” the veteran lawmaker urged.