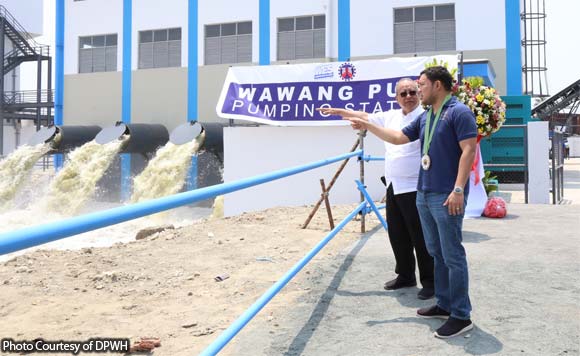 0
20
Want more POLITIKO News? Get the latest newsfeed here. We publish dozens and dozens of politics-only news stories every hour. Click here to get to know more about your politiko - from trivial to crucial. it's our commitment to tell their stories. We follow your favorite POLITIKO like they are rockstars. If you are the politiko, always remember, your side is always our story. Read more. Find out more. Get the latest news here before it spreads on social media. Follow and bookmark this link. https://goo.gl/SvY8Kr

The Department of Public Works and Highways (DPWH) on Saturday opened two new pumping stations in Valenzuela City to ease its flooding problem.

The pumping stations has a provision of primary and secondary trash rakes that hinder garbage and other wastes from intruding the pumps which also helps in keeping the river clean.

Public Works Secretary Mark Villar said the pumping stations in Valenzuela were part of the priority projects under the feasibility study on the Valenzuela-Obando-Meycauayan area and Drainage System Improvement Project.

“We implemented these projects to help in draining major areas of Valenzuela City to the Meycauayan River, easing the damages caused by frequent flooding that the residents have long been suffering from,” he said.