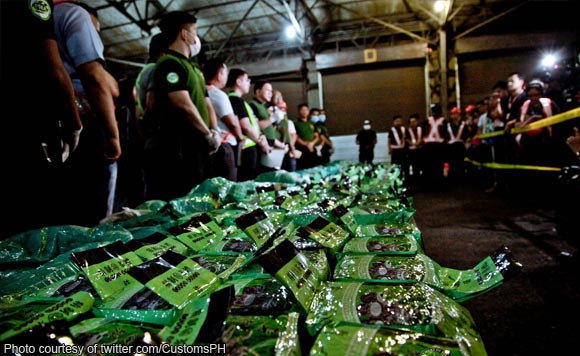 A shipment, containing 276 kilos of shabu worth P1.8 billion and packed to appear like tea products, was intercepted by the Bureau of Customs (BOC) and the Philippine Drug Enforcement Agency (PDEA) at the Manila International Container Port (MICP) Friday night.

“When the container was inspected, Customs and PDEA found 12 sacks containing items wrapped in clear cellophane and sealed in foil packaging designed to look like tea products,” Austria said in a statement.

“Upon testing the sample of the subject substance, authorities were able to confirm that the items were shabu,” he added.

The shipment was allegedly consigned to Wealth Lotus Empire Corp.

The contents of the intercepted shipment will be inventoried, and the illegal drugs found were turned over to PDEA for proper handling and investigation.

PDEA Director General Aaron Aquino said the apprehension was a result of their close coordination with their counterparts from Vietnam.

Acting on the report, the Customs Intelligence and Investigation Service proceeded with the profiling of the subject container aboard the vessel and narrowed the suspicion towards one shipment.

Austria immediately ordered an X-ray examination, followed by the full physical examination of the container of the suspected shipment in the presence of representatives of the PDEA, and the Philippine Coast Guard.

Based on the report, the intercepted shipment of drugs was processed by customs broker Jane A. Castillo with business address at Sta. Lucia St., Intramuros, Manila.

The BOC official attributed the successful apprehension of the illegal drugs through strengthened linkages, proper coordination, intelligence sharing and close partnership PDEA has with other agencies.

Customs Commissioner Rey Leonardo Guerrero said he would immediately revoke the customs accreditation of the involved consignee and customs broker, and appropriate charges will be filed against them.

He also ordered all District Collectors to be on alert and to examine all other similar items to ensure that our border is safe from the possible entry of illegal drugs. (PNA)