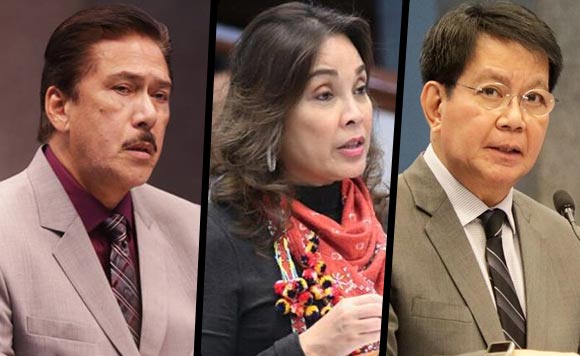 0 730
Share
Want more POLITIKO News? Get the latest newsfeed here. We publish dozens and dozens of politics-only news stories every hour. Click here to get to know more about your politiko - from trivial to crucial. it's our commitment to tell their stories. We follow your favorite POLITIKO like they are rockstars. If you are the politiko, always remember, your side is always our story. Read more. Find out more. Get the latest news here before it spreads on social media. Follow and bookmark this link. https://goo.gl/SvY8Kr

Sotto, in response, described Suarez as a “fabulist” or writer of fables.

“I asked Loren re. (the) statement of Danny Suarez. Well, now I know Danny Suarez is a fabulist,” Sotto told reporters in a group message.

In a Twitter post, Legarda denied Suarez’s allegation, noting that the chamber’s members support Sotto’s stand on the budget issue.

“We all stand by Senate Pres. Tito Sotto re: the budget. From the start. Unequivocally. Any misinformation is just that. Misinformation,” Legarda said.

Senator Panfilo Lacson noted that senators, both in the majority and minority, are “solidly” behind the Senate President.

“Has Congressman Suarez, the House ‘company union’ minority leader become so desperate for his share of the pork allocation that he now resorts to lying just to get his bounty,” Lacson said. (PNA)