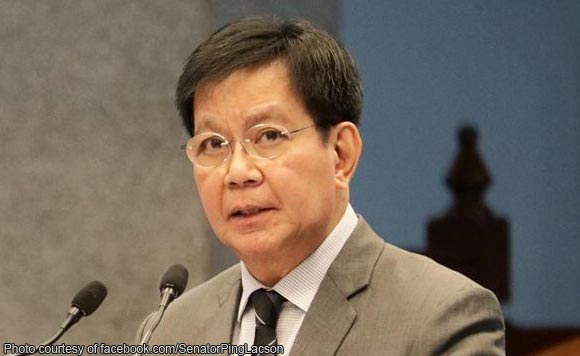 0 323
Share
Want more POLITIKO News? Get the latest newsfeed here. We publish dozens and dozens of politics-only news stories every hour. Click here to get to know more about your politiko - from trivial to crucial. it's our commitment to tell their stories. We follow your favorite POLITIKO like they are rockstars. If you are the politiko, always remember, your side is always our story. Read more. Find out more. Get the latest news here before it spreads on social media. Follow and bookmark this link. https://goo.gl/SvY8Kr

Vendetta is indeed a factor behind Sen. Panfilo Lacson’s efforts to take down the pork barrel system from the national budget.

But Lacson stressed this vendetta is aimed not at House Speaker Gloria Macapagal-Arroyo, but against all politicians who lust after the pork barrel funds.

Lacson aimed his reply, in the form of a post on his Twitter account, at House of Representatives members who continued accusing him of “vendetta” against Arroyo.

He said his actions against pork barrel in the 2019 budget are not about any individual congressman or senator, but about his crusade against the pork barrel system and the national budget.

He added he will continue to criticize those who go against his advocacy of keeping the budget free of pork, which had been outlawed by the Supreme Court way back in 2013 but is still resurrected in different forms.

Earlier this month, Lacson bared post-ratification manipulations by the House leadership on the budget bill after it was ratified last Feb. 8.

He cited figures from the Senate’s Legislative Budget Research and Monitoring Office (LBRMO) showed a net increase of P95.1 billion in the House of Representatives’ realignments.

This includes the slashing of P72.319 billion from the Department of Public Works and Highways’ Major Final Output (MFO) 1 and 2.

Also, the House rearranged or realigned P79.7 billion from several congressional districts to the other districts, and parked P70 billion in the DPWH central office after removing them from 87 District Engineering Offices (DEOs).

“Parking the P70 billion in the DPWH’s central office was meant to make it difficult for people – including myself – to trace where it will go. You could call it a veiled effort to conceal large ‘pork insertions’ of some congressmen,” Lacson said.

Lacson also disclosed the post-ratification maneuvering of funds in the budget by the House leadership – a violation of the 1987 Constitution’s Art. VI, Sec. 2, Paragraph 2: “Upon the last reading of a bill, no amendment thereto shall be allowed.”

The post-ratification tweaks by the House leadership included the Department of Health’s Health Facilities Enhancement Program (HFEP) funds – where Speaker Gloria Macapagal-Arroyo’s allies got P25 million while those who did not vote for her got just P8 million. Lacson said he got his information from House members who noticed the discrepancy.

Worse, the Duterte administration’s “Build, Build, Build” legacy program was not spared, due to the slashing of P72.319 billion from the DPWH’s MFO 1 and 2.

The DPWH projects affected by the slashing include those had already been planned and vetted for months, or even years.