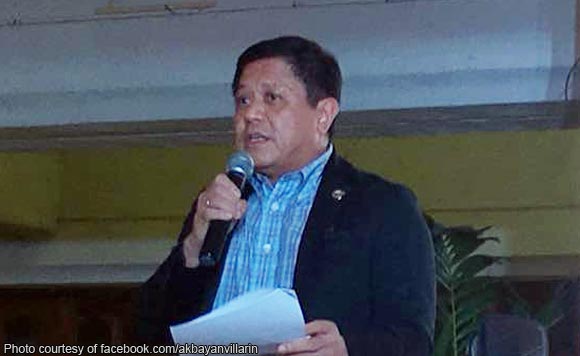 0 346
Share
Want more POLITIKO News? Get the latest newsfeed here. We publish dozens and dozens of politics-only news stories every hour. Click here to get to know more about your politiko - from trivial to crucial. it's our commitment to tell their stories. We follow your favorite POLITIKO like they are rockstars. If you are the politiko, always remember, your side is always our story. Read more. Find out more. Get the latest news here before it spreads on social media. Follow and bookmark this link. https://goo.gl/SvY8Kr

The Commission on Elections is now being ‘weaponized’ by the Duterte administration to “subvert the electoral process to assure its favored candidates victory in the national and local elections,” Akbayan party-list Rep. Tom Villarin said on Tuesday.

In a statement, the Magnificent 7 lawmaker said the supposed threats in Mindanao do not warrant the declaration of the entire island as a category red election hotspot.

Villarin said the supposed election-related incidents in the past two elections and armed threats from the New People’s Army, the Bangsamoro Islamic Freedom Fighters and extremist groups are not serious enough as to warrant were insufficient to justify the tagging.

“Now this unilateral Comelec declaration of Mindanao as a code red hotspot finally reveals the whole intent of Duterte to dictate the outcome of the May elections,” he said.

“It is highly sinister and speculative to say that election-related violence has engulfed Mindanao or that peace and order has broken down as to warrant Comelec control over the entire island,” Villarin said.

“Was there a failure of barangay elections in Mindanao? Was there failure in the holding of the recent BARMM plebiscite? Both the answers to these questions are in the negative,” he said.

Comelec, according to Villarin, “should never become an unwitting tool to subvert our democracy and it does not bode well for the conduct of free and fair elections.”

“Comelec should therefore review and rescind such blanket declaration in the soonest possible time,” he said.

“From extending martial law, red-baiting of administration critics, narco list-tagging, killings of lawyers, and now to declaring the whole island of Mindanao as an election hotspot, this shows the manipulative hand of Duterte to rig the coming elections in its favor,” he said.

“As if martial law is not enough, Mindanaoans are again subjected to this ignominy of being declared as a hotspot for the sake of ‘gaming’ the electoral process to suit Malacañang’s interests. This is a threat to our democracy which we should all resist,” Villarin said.