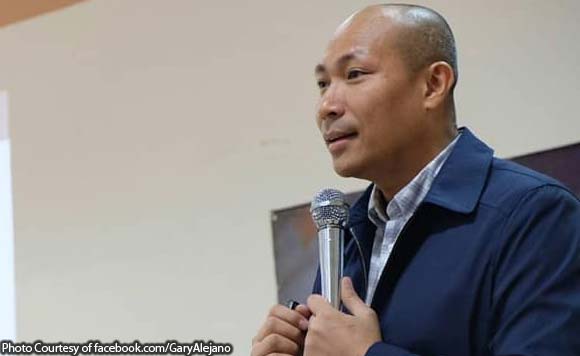 0 605
Share
Want more POLITIKO News? Get the latest newsfeed here. We publish dozens and dozens of politics-only news stories every hour. Click here to get to know more about your politiko - from trivial to crucial. it's our commitment to tell their stories. We follow your favorite POLITIKO like they are rockstars. If you are the politiko, always remember, your side is always our story. Read more. Find out more. Get the latest news here before it spreads on social media. Follow and bookmark this link. https://goo.gl/SvY8Kr

Magdalo party-list Rep. Gary Alejano has dismissed President Rodrigo Duterte’s release of the so-called “narco list” as nothing but a ploy to make people believe that the war on drugs is effective.

In a statement Friday, Alejano said Duterte’s naming of politikos allegedly involved in illegal drugs was aimed at controlling them ahead of the May elections.

“This is also a mere show of bravado to make the people believe that the war on drugs is working. It is not,” he said.

In a televised address Thursday, Duterte revealed some of the names of politikos allegedly involved in the illegal drug trade. A list from the Department of Interior and Local Government contained 46 names, with the highest officials being congressmen.

Duterte said administrative charges have been filed against the so-called “narco politikos” before the Office of the Ombudsman.

Alejano, however, said charges against the “narco politikos” should be filed in court if the administration has solid evidence against them.

Continue Reading
Department of Interior and Local GovernmentMagdalo Party-listnarco-listOffice of the OmbudsmanPresident Rodrigo DuterteRep. Gary Alejanowar on drugs
0 605
Share
Politiko would love to hear your views on this...
Trending News
More Stories