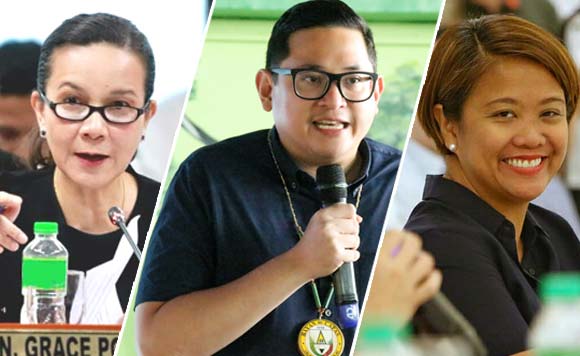 0 1,300
Share
Want more POLITIKO News? Get the latest newsfeed here. We publish dozens and dozens of politics-only news stories every hour. Click here to get to know more about your politiko - from trivial to crucial. it's our commitment to tell their stories. We follow your favorite POLITIKO like they are rockstars. If you are the politiko, always remember, your side is always our story. Read more. Find out more. Get the latest news here before it spreads on social media. Follow and bookmark this link. https://goo.gl/SvY8Kr

The nine candidates were announced at the Quezon City Sports Club in Quezon City.

The other Makavayan-endorsed candidates were Chel Diokno, Samira Gutoc, Florin HIlbay, and Erin Tañada, who all belong to the Otso Diretso slate, as well as returning senator Serge Osmeña.

“In these times of massive poverty, escalating efforts to stifle dissent and a rising threat of dictatorship, where impunity reigns and the system of checks and balances among the Executive, Judiciary and Legislative branches of government is in peril, we need an independent Senate,” Makabayan said.

“The upcoming elections gives us the opportunity to elect to the Senate men and women of proven competence and integrity who can assert the Senate’s independence and push for laws that favor our people. Candidates who have a proven track record of public service and a fighting chance to win,” it added.

Makabayan, according to Makabayan leader Satur Ocampo, will be working with the nine candidates on the following common issues and concerns:

1. The suspension or repeal of the excise tax provision of the TRAIN Law;

2. Opposition to Charter Change and similar self-serving, draconian and anti-Filipino amendments to the Constitution;

3. The upholding of human rights and due process for all Filipinos;

4. Upholding our sovereignry and rights in the West PH Sea;

5. Resumption of the peace talks with the National Democratic Front of the Philippines (NDFP).

“We hope that through this endorsement, Makabayan can contribute to the formation of a coalition of independent and opposition candidates that can provide our people the best hope for an independent and pro-people Senate,” Makabayan said.