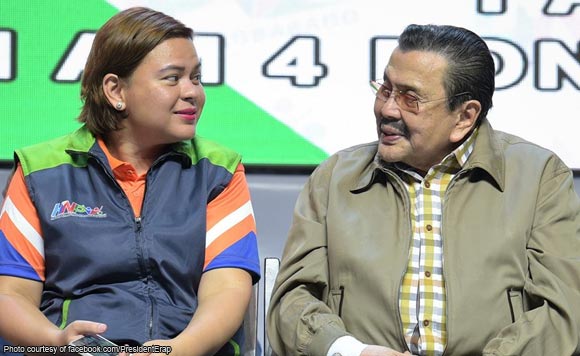 0 1,316
Share
Want more POLITIKO News? Get the latest newsfeed here. We publish dozens and dozens of politics-only news stories every hour. Click here to get to know more about your politiko - from trivial to crucial. it's our commitment to tell their stories. We follow your favorite POLITIKO like they are rockstars. If you are the politiko, always remember, your side is always our story. Read more. Find out more. Get the latest news here before it spreads on social media. Follow and bookmark this link. https://goo.gl/SvY8Kr

Duterte visited Manila on February 28 with HNP’s senatorial slate to show that the party has PMP and Estrada’s support in the May midterm elections.

During the program at the San Andres Sports Complex, Estrada prodded Duterte to run for president in 2022.

Estrada said Duterte will be the most feisty and most beautiful female president of the country should she end up in Malacañang like her father, President Rodrigo Duterte.

The two mayors are already “kumpadres” since Estrada is a godfather to Duterte’s son, Stonefish.