‘I loved her even more!’ Find out what Sara Duterte did that touched Joy Belmonte 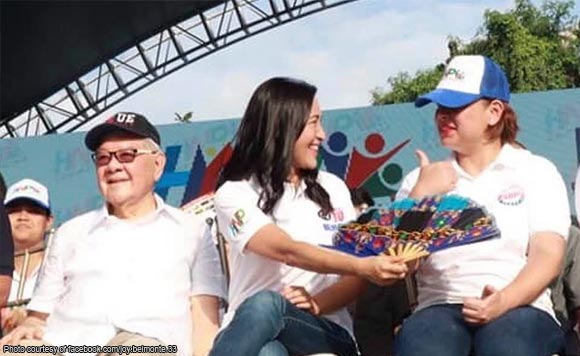 Quezon City vice mayor Joy Belmonte may already be a fan of Davao City mayor Sara Duterte, but her admiration for the presidential daughter deepened because of a simple gesture that she did recently.

In a Facebook post, Belmonte shared the worry that Duterte expressed when she saw the vice mayor’s father, Quezon City Rep. Sonny Belmonte, standing under the heat of the sun during Hugpong ng Pagbabago’s campaign sortie on Thursday at the Amoranto Stadium.

The vice mayor then asked her father to come down the stage but the elder Belmonte refused. He only did after Duterte approached him.

“Mayor Sara had to speak to him gently and tell him na sa lilim muna siya umupo. When he went down she told me ‘nag-alala lang talaga ako sa kanya,'” the vice mayor said.

Touched by Duterte’s gesture, Belmonte said: “Thank you Mayor Sara for being a daughter not just to your father, PRD, but to mine as well.”