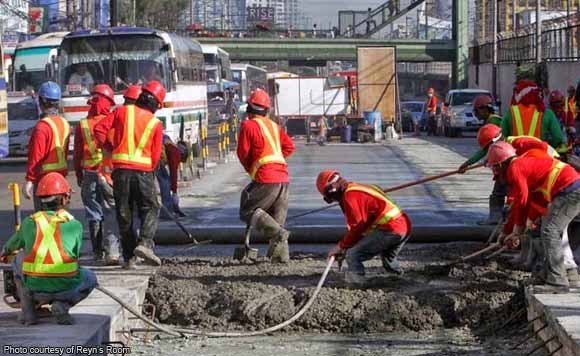 0 1,103
Share
Want more POLITIKO News? Get the latest newsfeed here. We publish dozens and dozens of politics-only news stories every hour. Click here to get to know more about your politiko - from trivial to crucial. it's our commitment to tell their stories. We follow your favorite POLITIKO like they are rockstars. If you are the politiko, always remember, your side is always our story. Read more. Find out more. Get the latest news here before it spreads on social media. Follow and bookmark this link. https://goo.gl/SvY8Kr

The Department of Public Works and Highways (DPWH) will conduct repair and maintenance works in four areas of Metro Manila this weekend.

In a statement, DPWH-National Capital Region Director Ador Canlas said the Metropolitan Manila Development Authority (MMDA) has given clearance to do road works along C-5 Road in the cities of Pasig and Taguig and Edsa in Quezon City starting 11 p.m. Friday.

He said the repair works on C-5 will be at the southbound directions, after Lanuza Avenue in Pasig before reaching the Bagong Ilog Flyover and fronting SM Aura in Taguig.

Repair and maintenance will also be done at the southbound direction of Edsa, from Lagarian Creek to Ermin Garcia, second lane from sidewalk, Quezon City.

Canlas said repair works will also be done at the northbound Magsaysay Boulevard going to Cubao, from R. Magsaysay Bridge to Pureza Street in the City of Manila.

All affected road sections will be open to traffic by 5 a.m. on Monday (March 4). (PNA)