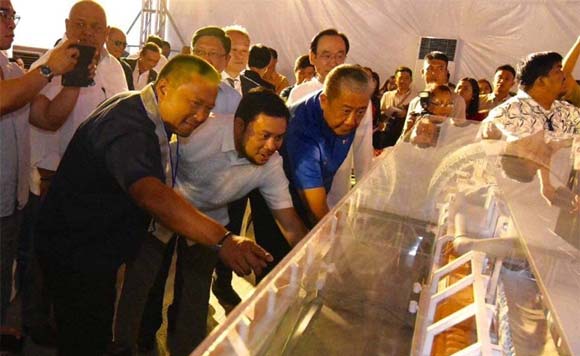 Senator JV Ejercito on Wednesday said the country will never realize full economic growth if the government will not invest in infrastructure.

He made the remark following the launching of the Metro Manila subway project in Bgy. Ugong, Valenzuela City.

“I’m glad that the President has the political will to really push for this,” said Ejercito, who was seeking reelection in the May midterm polls.

“One of the reasons why I support President Duterte is because he is the only President in the recent years to commit and spend P3 trillion for infrastructures in the next six years,” Ejercito said.

The senator said he will always support the “Build, Build, Build” program of the Duterte administration.

“This is the only way for us to achieve full economic growth. We will be able to spread the development and we can create growth development areas in all provinces,” he said.

“Kung gusto natin ng tunay na hanapbuhay, if we want genuine exclusive growth, we really have to invest in infrastructure and transport modernization,” .

“And this time, what used to be like a dream is becoming a reality now – the Metro Manila Subway System,” Ejercito said.

“I know we really need this because this will stimulate economic growth. For me, railway is the only way,” he said.

He added, “The only way we can spread out development to the countryside and, at the same time, decongest Metro Manila, Cebu and Davao, is through infrastructure development and transport modernization.”

“I think the Philippines is 30 years behind in terms of infrastructure development. We have a lot of catching up to do,” Ejercito said.

“And the DoTr (Department of Transportation) has been moving and I would like to commend Secretary Tugade and it’s a pleasure to have defended the budget of DoTr in recent years,” he said.

“We have a growing population, now stands at 105 million; and 30,000 new vehicles are added to our streets every month – that’s around one million vehicles in the next three years,” he said.