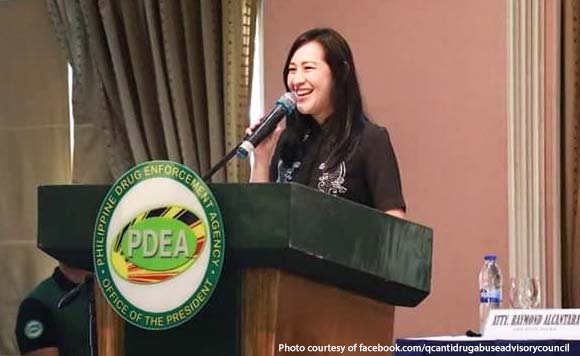 MANILA — The Quezon City local government on Tuesday vowed to step up its efforts in ensuring a drug-free workplace in the city through a partnership with the Philippine Drug Enforcement Agency (PDEA) that seeks to eliminate drug abuse among private establishments.

Quezon City Vice Mayor and Quezon City Anti-Drug Abuse Advisory Council (QCADAAC) chairperson Joy Belmonte said they are pleased to team up with the PDEA in promoting a drug-free workplace, which the city has been doing since the passing of the ordinance for annual mandatory drug testing to city government employees.

“We are proud to work with PDEA on this advocacy because our city has been recognized by various agencies and other cities for our measures to counter illegal drugs in our city,” Belmonte said in an interview.

“Even before the Duterte administration, Quezon City has already implemented a program for a drug-free workplace where we conduct mandatory drug testing for all offices of the Quezon City local government. And since it was conducted, we have been recording a significant drop to the number of those who tested positive so we know that this program will be effective,” she added.

The PDEA launched the drug-free workplace advocacy program on private establishments such as hotels, restaurants, bars, subdivisions, condominiums, and warehouses where employees will be educated on the harmful effects of illegal drug abuse, and is expected to be replicated by other cities and municipalities.

“We want a safe and healthy work environment for all workplaces in Quezon City. That’s why we started promoting the drug-free workplace right here in our local government offices and barangays,” Belmonte said.

Belmonte noted that almost 23,377 Quezon City government employees and barangay officials have completed mandatory drug testing between 2016 and 2018, citing that the measure was effective in curbing illegal drug abuse among public servants.

She was referring to the ordinance for an annual mandatory drug testing to government employees in Quezon City.

“In 2017, we also passed an ordinance for drug-free workplace on private establishments where our City Business Permits and Licensing Office will not renew permits for businesses that will not give records that their employees are 100 percent drug-free. And we are glad because they have been supportive of this ordinance,” she said.

“I am proud to say that Quezon City is one of the cities where all of the stakeholders, from public to private sectors are in unison in achieving a drug-free city,” she added. (PNA)