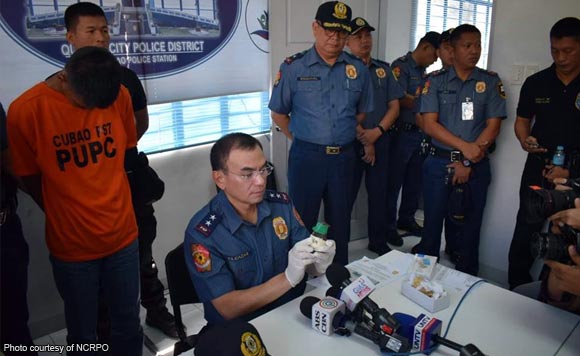 0 362
Share
Want more POLITIKO News? Get the latest newsfeed here. We publish dozens and dozens of politics-only news stories every hour. Click here to get to know more about your politiko - from trivial to crucial. it's our commitment to tell their stories. We follow your favorite POLITIKO like they are rockstars. If you are the politiko, always remember, your side is always our story. Read more. Find out more. Get the latest news here before it spreads on social media. Follow and bookmark this link. https://goo.gl/SvY8Kr

MANILA — Authorities nabbed a passenger of the Metro Rail Transit Line 3 (MRT3) after an explosive was found inside his baggage at MRT-3 Cubao station.

In a statement, the MRT-3 management said bag inspectors found a live hand grenade inside the baggage of Christian Guzman, 29, at the inspection area on Saturday at 7:10 pm.

“The live grenade was wrapped by a packaging tape and placed inside a cellphone box. The incident was immediately reported by MRT-3 guards to police officers inside the station,” the statement read.

After questioning, Guzman was immediately brought to the police detachment in Shaw Boulevard for further investigation.

He was charged of violating RA 9516 or Illegal Possession of Ammunition and Explosives, and is now in the custody of Police Station 7 in Cubao.

He is set to undergo inquest proceeding at the Quezon City Prosecutor’s Office later Sunday.

The management stressed that they will take the case seriously.

“We ask the patience and cooperation of our passengers as we further tighten the security measures being implemented in our stations. Please understand that these measures are being done to protect the safety and security of our passengers,” the statement read.

It also encouraged passengers to remain vigilant and to report immediately to security personnel items, activities, and even individuals that they may find suspicious inside the trains or stations. (PNA)