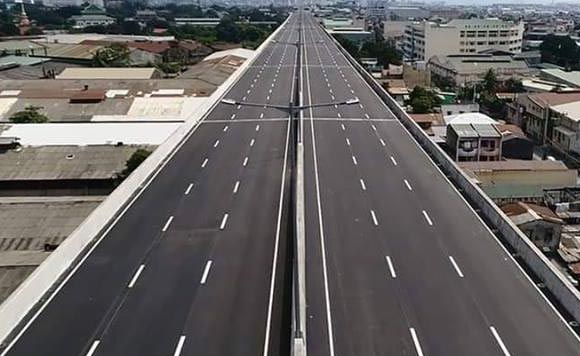 The 5.65-kilometer North Luzon Expressway (NLEX) Harbor Link Segment 10 is set to open on February 26, the Department of Public Works and Highways (DPWH) announced on Wednesday.

DPWH Secretary Mark Villar said once the elevated expressway is opened, the travel time from Circumferential Road 3 (C3) to NLEX will only be 10 minutes.

“We are glad that this much-awaited traffic decongestion project will soon be open to our motorists. With this new road, travel time between C3 and NLEX will only take 10 minutes,” he said in a statement.

Traversing the cities of Valenzuela, Malabon, and Caloocan, the NLEX Harbor Link Segment 10 is seen to ease traffic bottlenecks as it diverts 30,000 vehicles daily away from the busy streets of Metro Manila.

It will also facilitate the efficient delivery of goods as cargo trucks will have 24/7 direct access from the port area to the provinces in northern Luzon and vice versa.

This alternative route will enable travelers from Manila to Central and North Luzon to have shorter travel time, as they can head straight to the NLEX bypassing Edsa and the Balintawak Toll Plaza. The next phase of this project is the 2.6-km section from C3 Road, Caloocan City to R10, Navotas City.

Along with the full opening of the NLEX Harbor Link Segment 10 is the partial opening of the new Caloocan Interchange — the fourth gateway of NLEX to Metro Manila, after Balintawak, Mindanao Avenue, and Karuhatan.

The new Caloocan Interchange serves as the point, where the NLEX Harbor Link Segment 10, the C3-R-10 section, and the NLEX Connector will converge. This junction is located along the PNR tracks in 5th Avenue/C3 Road in Caloocan City.

“Apart from our team’s commitment to support the administration’s ‘Build Build Build’ program, the government’s help in ramping up the acquisition of right-of-way made us deliver this vital infrastructure which aims to bolster development and ease traffic congestion in the country,” he added.

The undertaking will also pave the way for the NLEX Connector, which is expected to decongest major thoroughfares and improve linkages between the north and south. (PNA)