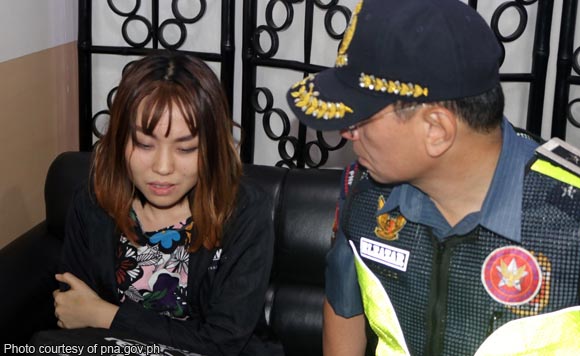 0 798
Share
Want more POLITIKO News? Get the latest newsfeed here. We publish dozens and dozens of politics-only news stories every hour. Click here to get to know more about your politiko - from trivial to crucial. it's our commitment to tell their stories. We follow your favorite POLITIKO like they are rockstars. If you are the politiko, always remember, your side is always our story. Read more. Find out more. Get the latest news here before it spreads on social media. Follow and bookmark this link. https://goo.gl/SvY8Kr

MANILA — A female Chinese national was arrested for disrespecting and assaulting a policeman assigned at the Metro Rail Transit’s (MRT) Boni Ave. station in Mandaluyong City on Saturday.

Based on initial reports, the station’s on-duty security guard stopped
Zhang from bringing with her a cup of “taho”, explaining to her the ban on liquid items implemented by the MRT.

PO1 Cristobal intervened and explained to Zhang the policy but she refused to comply and threw the food at him, staining his uniform.

The incident prompted Cristobal and PO1 Dominador Olempiada to arrest the suspect for disobedience to an agent or person in authority and direct assault and bring her to the Police Community Precinct 5 in Mandaluyong.

The suspect has undergone booking procedures prior to inquest proceedings for the case of direct assault and disobedience to an agent of authority.

Meanwhile, the Bureau of Immigration has yet to coordinate with authorities regarding Zhang’s case.

“We will be coordinating with the DOTr (Department of Transportation and the NCRPO for details about the case and will study possible actions against said foreigner,” BI spokesperson Dana Krizia Sandoval said in a text message to reporters.

Eleazar said earlier he recommended the strict implementation of the “No Foods, No Drinks Allowed” policy at the LRT and MRT as a preventive measure against any terror attack using liquid bombs.

The ban on bringing of liquid items inside the train stations’ premises was enforced in the wake of the January 27 twin blasts in Jolo, Sulu. (With reports from Ferdinand Patinio/PNA)