Kesa matengga: GMA steps in to give BCDA’s property to Parañaque’s urban poor 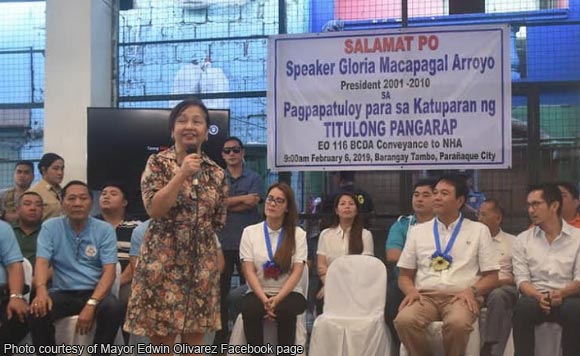 0 539
Share
Want more POLITIKO News? Get the latest newsfeed here. We publish dozens and dozens of politics-only news stories every hour. Click here to get to know more about your politiko - from trivial to crucial. it's our commitment to tell their stories. We follow your favorite POLITIKO like they are rockstars. If you are the politiko, always remember, your side is always our story. Read more. Find out more. Get the latest news here before it spreads on social media. Follow and bookmark this link. https://goo.gl/SvY8Kr

More than 400 families in Seaside, Parañaque City will finally have land titles after House Speaker Gloria Macapagal Arroyo worked with the Bases Conversion and Development Authority (BCDA) for the turnover of a one-hectare property for the urban poor.

Arroyo and BCDA officials visited the beneficiaries of land titles on Wednesday to assure them that they will receive their long-delayed titles before the year ends.

Part of the declared sites for urban poor housing belonged to BCDA.

The processing for the release of the individual titles was stalled under the term of former President Benigno Aquino III in 2011 when Malacañang claimed documents related to the propert were lost.

When Arroyo assumed the speakership last year, she got in touch with BCDA General Manager Vince Hizon for the issuance of a Deed of Conveyance for the property so that the land titles will finally be released to the beneficiaries.

Joining Arroyo in the visit to Parañaque were Mayor Edwin Olivarez and his brother, Rep. Eric Olivarez.