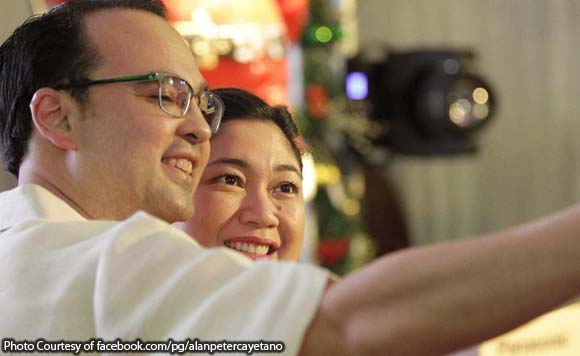 0 1,273
Share
Want more POLITIKO News? Get the latest newsfeed here. We publish dozens and dozens of politics-only news stories every hour. Click here to get to know more about your politiko - from trivial to crucial. it's our commitment to tell their stories. We follow your favorite POLITIKO like they are rockstars. If you are the politiko, always remember, your side is always our story. Read more. Find out more. Get the latest news here before it spreads on social media. Follow and bookmark this link. https://goo.gl/SvY8Kr

How can former Foreign Affairs Secretary Alan Peter Cayetano and his wife, Taguig Mayor Lani Cayetano, live in a small, one-bedroom condominium unit at Bonifacio Global City when it’s the same space which two of Alan’s siblings also consider as their home address?

This was the question raised by the camp of a Taguig resident before the Commission on Elections (Comelec) Monday regarding a petition to disqualify Alan and Lani as candidates in the May midterm polls.

Lawyer Emil Marañon III, counsel for petitioner Leonides Buac Jr. of Signal Village in Taguig, noted several inconsistencies in the details of residences indicated by the Cayetano couple in their respective certificates of candidacy (COC).

Alan is running for congressman of Taguig’s 1st district while Lani wants to represent the city’s 2nd district in Congress.

Marañon said the title of the Two Serendra condominium unit which Lani indicated as her home address in her COC showed it only has a single bedroom.

He said the same condominium unit was also used by Alan’s siblings, Pia and Lino, as their home address whenever they ran for public office.

“So how could three families — the family of Lino, who owns the unit, Lani and Alan Peter Cayetano, and Pia who lives there — fit in that unit? Our point is: It’s impossible for three families to fit in a small condominium unit. So it appears the Cayetano couple are lying,” Marañon said.

Pia, the incumbent congressional representative of Taguig’s 2nd district, is running for senator while Lino wants to succeed Lani as mayor.

Marañon said the Cayetano couple also put different move-in dates for the Two Serendra condominium they claimed to be residing in, raising questions on whether it was theirs in the first place.

“Our point is: If you really transferred to Serendra, why don’t you know the date when you started living there?” he said.