MMDA to enforce exclusive lane for motorcycles on EDSA: Cars reduced to 3 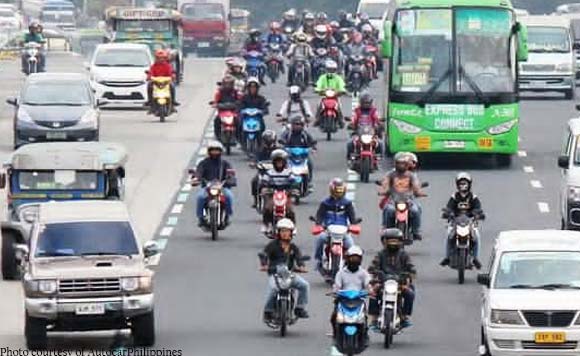 “Even if we narrow the roadways, it is still safe for the motorists,” MMDA general manager Jojo Garcia said in a press briefing following the meeting of the Metro Manila Council (MMC).

The proposed traffic scheme aims to narrow down the width of Edsa lanes by three meters to create a new lane for motorcycles.

Garcia said the agency is also considering converting the new lane to “exclusive motorcycle lane” next to the yellow lanes for public utility buses. The existing motorcycle lane or blue lane along Edsa is non-exclusive and can be used by private vehicles.

Garcia said the MMDA will create a technical working group to study the appropriate speed for the proposed 3.5-meter lanes on Edsa as the MMC, which consists of Metro Manila mayors, approved the drafting of a resolution for a study on the “road diet plan.”

“We shall also invite the stakeholders to know their take on the ‘road diet plan’,” he said.

The Department of Public Works and Highways (DPWH) has estimated that roads can be reduced to 3.5 meters.

Under the “road diet plan”, Edsa will be segregated to two lanes exclusive for passenger buses, a lane for motorcycles, and three remaining lanes for private vehicles.

Other ideas considered for the creation of new lane are wider sidewalks, pedestrian islands, crossways, bike lanes and “green space”.

Currently, Edsa has five to six lanes, with an average of 3.5 to 3.7 meters width per lane. (With reports from Irish Cana, OJT/PNA)