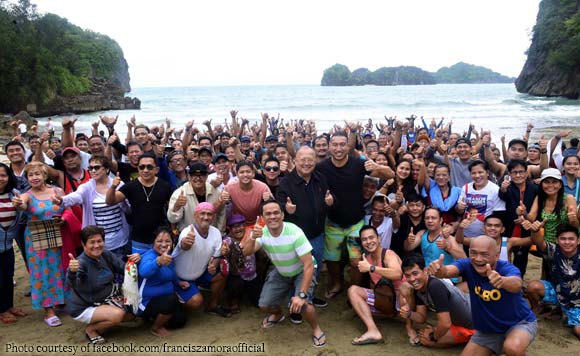 0 1,551
Share
Want more POLITIKO News? Get the latest newsfeed here. We publish dozens and dozens of politics-only news stories every hour. Click here to get to know more about your politiko - from trivial to crucial. it's our commitment to tell their stories. We follow your favorite POLITIKO like they are rockstars. If you are the politiko, always remember, your side is always our story. Read more. Find out more. Get the latest news here before it spreads on social media. Follow and bookmark this link. https://goo.gl/SvY8Kr

Former San Juan City Vice Mayor Francis Zamora and his father, Congressman Ronaldo Zamora, treated over 100 barangay officials in their bailiwick to a grand vacation in Bicol ahead of the start of the campaign season.

The Zamoras recently brought barangay and Sangguniang Kabataan officials of San Juan to Caramoan Islands in Camarines Sur for some much needed rest and relaxation.

Photos shared by Francis on his Facebook page showed the barangay officials having the time of their lives with him and his father on the secluded island, where a season of the hit US reality show “Survivor” was shot.

The vacation was also an opportunity for the Zamoras to build rapport with barangay officials as they face stiff competition in their respective electoral bids in May.