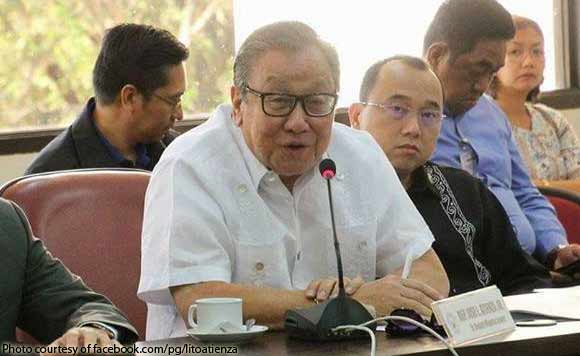 0 1,115
Share
Want more POLITIKO News? Get the latest newsfeed here. We publish dozens and dozens of politics-only news stories every hour. Click here to get to know more about your politiko - from trivial to crucial. it's our commitment to tell their stories. We follow your favorite POLITIKO like they are rockstars. If you are the politiko, always remember, your side is always our story. Read more. Find out more. Get the latest news here before it spreads on social media. Follow and bookmark this link. https://goo.gl/SvY8Kr

The “battle” to rehabilitate Manila Bay will not be won unless The capital’s two private water concessionaires build the sewage treatment plants they were supposed to build and operate a long time ago, Buhay party-list Rep. Lito Atienza said.

“President Rodrigo Duterte is in an excellent position to use his executive powers to coerce compliance – so that both Manila Water Co. Inc. and Maynilad Water Services Inc. will finally provide adequate sewage treatment plants,” he said.

Atienza, a former Manila mayor and Environment Secretary, said Manila Bay will remain as Metro Manila’s “giant septic tank” unless the wastewater discharged into it is treated.

The lawmaker lamented that Manila Water and Maynilad have only put up small sewage treatment plants despite collecting “billions of pesos” in sanitation fees from consumers.

Sewage treatment is the process of filtering and purifying municipal wastewater generated by households plus commercial and industrial establishments.

It involves the use of physical, chemical, and biological processes to remove contaminants so that the treated water or effluent can be safely recycled or released back into the environment.