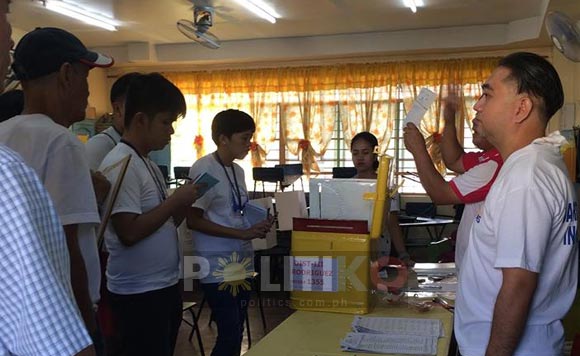 0 480
Share
Want more POLITIKO News? Get the latest newsfeed here. We publish dozens and dozens of politics-only news stories every hour. Click here to get to know more about your politiko - from trivial to crucial. it's our commitment to tell their stories. We follow your favorite POLITIKO like they are rockstars. If you are the politiko, always remember, your side is always our story. Read more. Find out more. Get the latest news here before it spreads on social media. Follow and bookmark this link. https://goo.gl/SvY8Kr

A party-list group on Monday asked the Commission on Elections (Comelec) not to allow members of the Alliance of Concerned Teachers (ACT) from serving in the May 13 elections.

Tao Muna secretary-general Mohammad Fajardo said ACT members should not be appointed as members of the Board of Election Inspectors (BEIs) to ensure fair and orderly polls.

“The undersigned strongly urges the Commission to strictly implement the law by not appointing public school teachers, who are members of ACT, to ensure fair and orderly conduct of elections,” he said in his letter to Comelec.

Fajardo noted that the ACT has its own party-list participating in the forthcoming elections.

“Clearly, it is a political party under the party-list system,” Fajardo said.

“BEI members, who are also members of ACT, could cause undue advantage and influence in favor of their party-list and to the disadvantage of other party-lists or other candidates running in the coming elections, whose campaign platforms or public pronouncements may be perceived as antagonistic to the ACT’s advocacies or cause,” he added.

Likewise, Fajardo cited prohibitions under the Omnibus Election Code (OEC) as another reason why ACT members should not be appointed as members of the BEIs.

“Under the law, public officers and employees are prohibited from engaging in partisan political activities. Under election laws, members of the BEI must be public school teachers,” he said.

“In as much as most members of ACT are public school teachers, it is, thus, unlawful for them to be appointed as BEI members,” he added.

Under the OEC, qualified to be members of the BEI must be of good moral character and irreproachable reputation; a registered voter of the city or municipality; and has never been convicted of any election offense or of any other crime punishable by more than six months of imprisonment, or has pending against him an information for any election offense.

It added that no person may serve as BEI members if she/he is related within the fourth civil degree of consanguinity or affinity to any member of the board of election inspectors or to any candidate to be voted for in the polling place or his spouse.