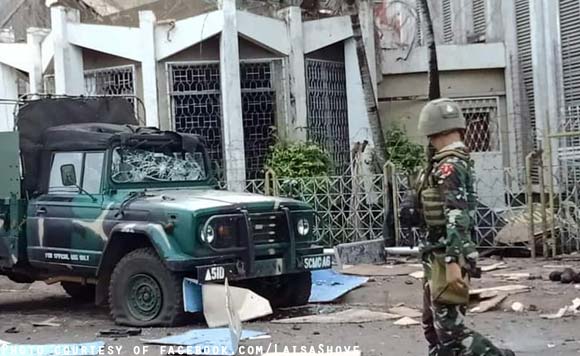 0 429
Share
Want more POLITIKO News? Get the latest newsfeed here. We publish dozens and dozens of politics-only news stories every hour. Click here to get to know more about your politiko - from trivial to crucial. it's our commitment to tell their stories. We follow your favorite POLITIKO like they are rockstars. If you are the politiko, always remember, your side is always our story. Read more. Find out more. Get the latest news here before it spreads on social media. Follow and bookmark this link. https://goo.gl/SvY8Kr

MANILA — The National Capital Region Police Office (NCRPO) announced
on Monday that it is on full alert status after the explosion that
took place inside and outside a Roman Catholic church in Jolo, Sulu
province that left 20 people dead and 112 wounded.

“We are full alert since 6 a.m. No cause for panic we want to make
sure so we intensify checkpoint operations at entry and exit points of
Metro Manila to prevent terrorists from sneaking in bombs,” Eleazar
told the Philippine News Agency (PNA) in a phone interview.

Full alert means the highest level of readiness in all police offices
and units in Metro Manila.

“In the next few weeks or so, we will increase the number and
frequency of our checkpoints including our ‘oplan sita’. We will
deploy our policemen and women in strategic areas of Metro Manila to
increase police presence and visibility, in order to discourage,
prevent and deter any evil plots from unfolding,” he added.

Eleazar personally checked the vital installations in Metro Manila as
well the checkpoints in metropolis on Monday.

Eleazar also appealed to the public to be alert and report to the
police any suspicious person or behavior.

“I encourage you to remain alert and vigilant. Report any suspicious
person or behavior, report any new or unfamiliar face in the
neighborhood to the nearest policeman you can reach or communicate
with personally or through our hotlines,” he said. PNA