‘Battle for Manila Bay’ starts with a big bang 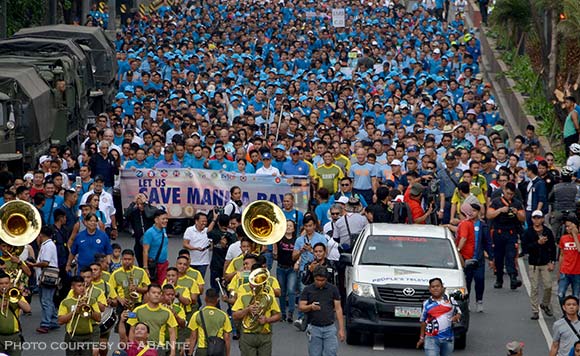 Some 5,000 volunteers gathered on Sunday at the Quirino Grandstand in Manila for a solidarity walk to signify the start of the Manila Bay rehabilitation efforts.

Multi-sectorial groups, stakeholders, officials and personnel of government agencies, religious groups, academe, students, civic and other non-government organizations attended the event to show their cooperation in the Save Manila Bay project.

The walk ended at the Rajah Sulayman Park, where the officials gave their keynote messages and urged the public to further support the project.

In his speech, Lim defined the rehabilitation of Manila Bay as a ‘Herculean’ task as it requires the effort of various government agencies and the public.

For his part, Villar said the event showed President Rodrigo Duterte’s firm decision and strong political will to clean the popular bay.

“We will allocate heavy equipment, we will procure a new technology, trash skimmers — this will collect garbage and full-time solely allocated for Manila Bay. This is just the beginning and you can expect us to allocate a bigger budget for Manila Bay,” he said.

Año clarified that establishments will be given enough time to correct their lapses but they will be shut down or sued if unable to comply within deadlines.

For his part, Cimatu urged the public to take part in cleaning up Manila Bay.

“As I declare the start of Battle for Manila Bay, I direct the DENR and the LLDA (Laguna Lake Development Authority) to issue a cease and desist order for those who violated environmental laws here in Manila Bay,” he added.

Cimatu led an inspection of the food establishments circling the bay and the three drainage canals leading to it right after the event.(PNA)