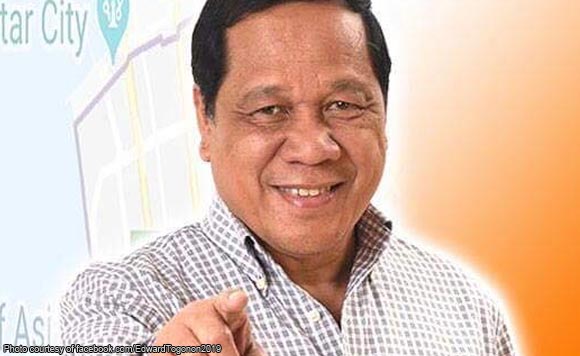 0 1,091
Share
Want more POLITIKO News? Get the latest newsfeed here. We publish dozens and dozens of politics-only news stories every hour. Click here to get to know more about your politiko - from trivial to crucial. it's our commitment to tell their stories. We follow your favorite POLITIKO like they are rockstars. If you are the politiko, always remember, your side is always our story. Read more. Find out more. Get the latest news here before it spreads on social media. Follow and bookmark this link. https://goo.gl/SvY8Kr

Former Pasay fiscal Edward “ET” Togonon has vowed to wage an “all out war” against garbage should he win as the city’s new mayor in the May midterm polls.

Togonon shared his desire to bring change to Pasay during a walking tour of the city’s esteros and canals, which were clogged with assorted solid waste.

“An all-out war against basura is what we need here. And Pasayenyos
deserve nothing less from the local government,” he said.

Despite being the eighth richest local government unit in Metro Manila, the Commission on Audit (COA) noted that only 164 of the city’s 201 barangays have Material Recovery Facilities (MRF) that would receive mixed waste for final sorting, segregation, composting and recycling.

The COA also found dout that the City Solid Waste Management Board (CSWMB) has been sidelined, with its functions delegated to the Pasay City Environment and Natural Resources Office (PCENRO), “an office which has another specific function to perform.”

The COA has ordered the Pasay City government to activate the CSWMB, which shall assist each barangay or cluster of barangays in establishing an MRF in accordance with the requirement of Republic Act 9003 or the Ecological Solid Waste Management Act of 2000.