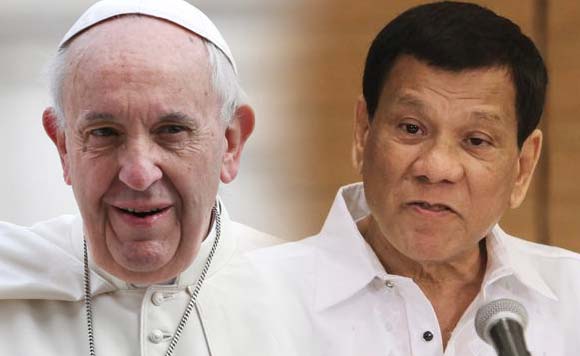 Pope Francis may have the opportunity to personally chide President Rodrigo Duterte for his “jokes” and attacks on the Catholic Church, if plans for a papal visit to the Philippines in 2021 pushes through.

The Catholic Bishops’ Conference of the Philippines said it is planning to invite the Pope to attend the fifth centenary of the arrival of Christianity in the Philippines.

CBCP secretary general Fr. Marvin Mejia said the bishops will take up the issue during their plenary assembly in Manila over the weekend.

Pope Francis visited the Philippines in 2015, where he made a stop in Malacanang.

The 2021 Jubilee celebrates the 500th anniversary of the first Mass and the first baptism in the Philippines.

In 2012, the CBCP embarked on a “nine-year journey for the New Evangelization” with a different theme each year to prepare the faithful for the celebration.

Sorsogon Bishop Arturo Bastes head of the CBCP’s Commission on Mission, said this will be the “first time” the local Church will invite the Pope to visit the hilippines.

“When Pope Francis came to the Philippines four years ago, it was he who volunteered to come in view of the big catastrophe caused by Yolanda,” he said.

While it is “very a seldom” that a pope visits a particular country twice, the bishop said that they are keeping their fingers crossed.

“Pope Francis might still consider to accept the invitation to celebrate with us the commemoration of the introduction of Christianity to our country,” said Bastes.