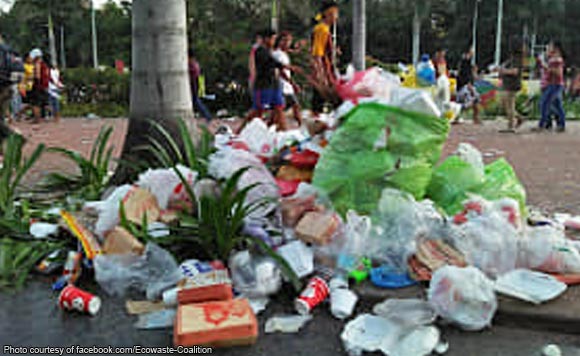 0 2,286
Share
Want more POLITIKO News? Get the latest newsfeed here. We publish dozens and dozens of politics-only news stories every hour. Click here to get to know more about your politiko - from trivial to crucial. it's our commitment to tell their stories. We follow your favorite POLITIKO like they are rockstars. If you are the politiko, always remember, your side is always our story. Read more. Find out more. Get the latest news here before it spreads on social media. Follow and bookmark this link. https://goo.gl/SvY8Kr

MANILA — The Metropolitan Manila Development Authority (MMDA) has collected around 47 truckloads of garbage left by devotees during the “Traslacion” of the Black Nazarene last January 9, an official said on Friday.

“Forty-seven truckloads of garbage hauled during the ‘Traslacion’ of the Black Nazarene equivalent to 564 cubic meters or 160 tons,” MMDA spokesperson Celine Pialago said in a text message to reporters.

A total of 850 personnel was deployed by the MMDA within the vicinity of the Quirino Grandstand, Quiapo Church and along the procession route to ensure the safety of devotees who joined the “Traslacion”.

The Sidewalk Clearing Group conducted the clearing of obstructions, particularly garbage at the Luneta parade grounds and roads along the 6-kilometer procession route from Quirino Grandstand to Quiapo Church in coordination with local government unit of Manila and the Department of Public Works and Highways.

Its Traffic Enforcement Division was in charge of managing traffic along the “Traslacion” routes.

The procession of the Black Nazarene left Quirino Grandstand at around 5 a.m. and lasted for about 21 hours and 7 minutes when it reached the Quiapo Church at 2:08 a.m. on Thursday.

Around 1.4 million devotees participated in this year’s “Traslacion” according to police estimates. (PNA)