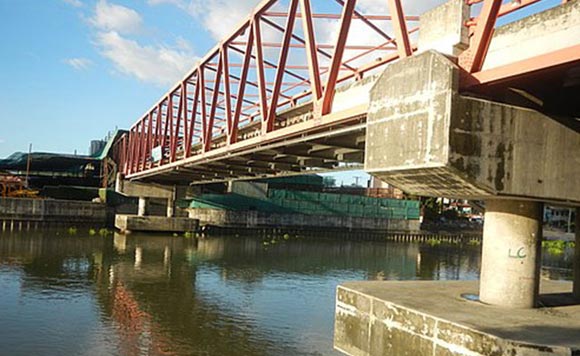 “The DPWH [Department of Public Works and Highways] will widen the bridge from existing two lanes to four lanes for a period of two-and-a half years,” MMDA general manager Jojo Garcia said in a press conference.

Garcia estimated that around 35,000 motorists passing through the bridge daily will be affected by the closure.

Travel time is also expected to take 30 minutes to an hour from the usual 10 minute drive due to the closure, he added.

The city governments of Makati and Mandaluyong will assist the MMDA in managing traffic, through its coordination with Task Force Operations Group, in clearing alternate routes for motorists.

Traffic signages and no parking signs will be installed within the vicinity of the road works within the week.

“Starting Monday, all traffic obstructions, including illegally parked vehicles and vendors will be cleared,” Garcia said.

In its advisory, the MMDA said motorists may use the following alternate routes for the duration of the bridge closure:

– All vehicles coming from the cities of Mandaluyong, San Juan and Quezon City using the Mabuhay Lane (Sgt. Bumatay and Barangka Drive) must take right at Pantaleon, then Coronado take the Makati –Mandaluyong Bridge to destination.

– Vehicles coming from Maysilo and San Francisco straight ahead to Coronado and Makati – Mandaluyong Bridge to destination.

– Other vehicles coming from Mandaluyong and are going to Makati Business Center shall also take Edsa then Guadalupe Cloverleaf to J. P. Rizal Avenue Extension, left at Estrella to destination.

– All exiting vehicles from TIVOLI Garden Residences shall use the back gate located at the Private Road (Sen. N. Gonzales Road).

– All vehicles coming from Makati Avenue, take P. Burgos (converted to one way), straight to Makati – Mandaluyong Bridge, Coronado then San Francisco can take Mabuhay Lane or to destination.

– Vehicles coming from Rockwell should take Estrella then right at Gumamela Street, left at Camia Street to J.P. Rizal to destination.

– Public Utility Jeepney (PUJ) and Tricycle shall be diverted to the Private Road (Sen. N. Gonzales Road) and vice versa.

The reconstruction of the bridge is expected to cost around PHP1.47 billion. It will also include the widening of its landing area by next year, according to the DPWH.

The reconstruction of the Estrella-Pantaleon Bridge is one of the two bridge projects on the Pasig River — the other being the Binondo-Intramuros span in Manila — that would be funded by China, based on development assistance agreements with the Duterte administration.

Meanwhile, DPWH Undersecretary for Unified Project Management Office (UPMO) Operations and Technical Services Emil Sadain appealed for understanding from motorists as the construction of the new bridge will last 30 months.

“We ask for the public’s patience and understanding as we intend to go full blast on implementation so we can complete and open a new four-lane bridge crossing Pasig River within the 30-month construction period or by 2021,” he said in a statement.

Sadain noted that the total bridge closure will allow project contractor, China Road and Bridge Corp., to accelerate the dismantling of the existing bridge and construction of a new 506-lineal meter bridge structure. (With reports from Ferdinand Patinio/Catherine Datiles, OJT/PNA)