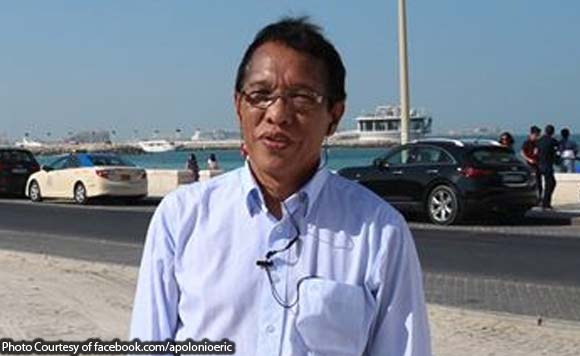 0 1,078
Share
Want more POLITIKO News? Get the latest newsfeed here. We publish dozens and dozens of politics-only news stories every hour. Click here to get to know more about your politiko - from trivial to crucial. it's our commitment to tell their stories. We follow your favorite POLITIKO like they are rockstars. If you are the politiko, always remember, your side is always our story. Read more. Find out more. Get the latest news here before it spreads on social media. Follow and bookmark this link. https://goo.gl/SvY8Kr

The Civil Aviation Authority of the Philippines (CAAP) is now investigating the incident involving a chopper that landed at the Ultra Philippine Sports Complex in Pasig City last Jan. 8.

“CAAP is conducting an initial investigation on the veracity and the circumstances surrounding the reports regarding the landing of an Airbus chopper at the Ultra Stadium,” CAAP spokesperson Eric Apolonio told the Philippine News Agency (PNA) on Thursday.

He noted that it is the operator and not the passengers who is being investigated.

“The investigation will primarily focus on the aircraft operator and the flight crew involved, because they are within our regulatory jurisdiction,” he said.

Videos and photos circulating online showed a chopper landed in the middle of the sports complex. There were youths in their sports uniform, signifying that the chopper landed amid an activity at the stadium.

Presidential Assistant for the Visayas Michael Dino was among the passengers. Apparently, Dino was there to pick up other passengers who will go with him for the launch of “Malasakit Center” in Batangas.

Dino reportedly took the opportunity to use the restroom while in Ultra.

Apolonio reiterated that the CAAP is investigating the flight operator, not the passengers, if violations on flight procedures were committed.

He also mentioned that the operator has filed a flight plan, but has no idea if said plan was approved before the chopper landed in Ultra.

“The flight plan is the subject of (CAAP’s) inquiry,” Apolonio said. (PNA)