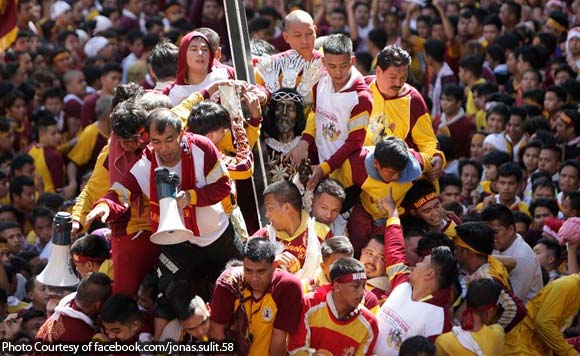 0 688
29
Want more POLITIKO News? Get the latest newsfeed here. We publish dozens and dozens of politics-only news stories every hour. Click here to get to know more about your politiko - from trivial to crucial. it's our commitment to tell their stories. We follow your favorite POLITIKO like they are rockstars. If you are the politiko, always remember, your side is always our story. Read more. Find out more. Get the latest news here before it spreads on social media. Follow and bookmark this link. https://goo.gl/SvY8Kr

The Traslacion or the procession of the Black Nazarene from Quirino Grandstand in Luneta to Quiapo Church along Quezon Boulevard in Manila ended earlier as compared to its recorded time of arrival last year.

“This year’s Traslacion is almost an hour shorter,” Msgr. Hernando Coronel, Quiapo Church rector, said in an interview on Thursday.

He also acknowledged all the people who helped in the holding of the annual Church event.

“My personal feeling is one of gratitude to all who helped in one capacity or another Traslacion 2019,” Coronel said. He said the Church was with happy with the millions of people who attended the feast which is being celebrated every year.

“Very happy. We are not after quantity but quality because we hear stories of ordinary people and their relationship with the Nazarene,” Coronel added.

Authorities reported that some 4 million devotees participated in the 10-day event which started on December 31, 2018 until January 9. (PNA)