Some Korean wastes to remain in PH 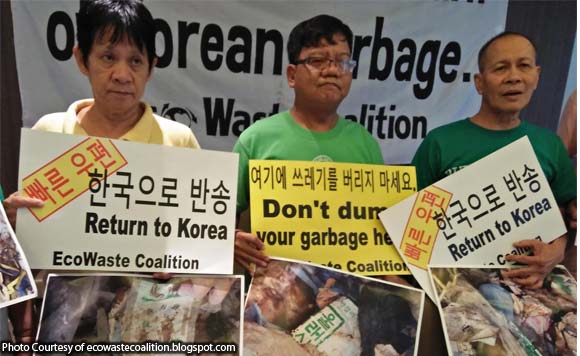 0 1,560
Share
Want more POLITIKO News? Get the latest newsfeed here. We publish dozens and dozens of politics-only news stories every hour. Click here to get to know more about your politiko - from trivial to crucial. it's our commitment to tell their stories. We follow your favorite POLITIKO like they are rockstars. If you are the politiko, always remember, your side is always our story. Read more. Find out more. Get the latest news here before it spreads on social media. Follow and bookmark this link. https://goo.gl/SvY8Kr

Not all of some 6,500 tons of mixed wastes brought into the Philippines will be sent back to South Korea starting Jan. 9, the Bureau of Customs and an ecological group said.

January 9 is the target date for the re-export of the first batch of containers of mixed garbage back to Pyeongtaek City in South Korea, EcoWaste Coalition said.

“We expect the 51 garbage-filled containers stored at MICT to be homebound by January 9 provided that all regulatory requirements are readily available. Their expedited re-export is what BOC wants and this is what our people are yearning for,” Mindanao International Container Terminal Port Collector John Simon said.

Simon said the re-exportation of the 51 containers to South Korea is due to the failure of the consignee, Verde Soko Philippines Industrial Corp., to secure prior import permit from the Department of Environment and Natural Resources (DENR).

Verde Soko was also found to have misdeclared the garbage shipments as “plastic synthetic flakes.”

Meanwhile, Simon said arrangements are being made to re-export within this month the bulk Korean garbage shipments sitting at the Verde Soko compound inside the Phividec Industrial Estate in Tagoloan.

“We look ahead to the imminent return of the Korean mixed garbage shipments to their source, and to the adoption of stringent policies to prevent their recurrence, including a crackdown on the importation of plastic waste. We need to act decisively to protect our country from turning into a global dump for plastics and other wastes that China no longer wants,” said EcoWaste coordinator Aileen Lucero.

The shipload of 5,176.91 metric tons of misdeclared “plastic synthetic flakes” exported by Green Soko Co. Ltd. and consigned to Verde Soko Philippines Industrial Corp. arrived at the MICT in July 2018, without prior import clearance from the DENR.

The same consignee facilitated the importation of additional 51 containers of “plastic synthetic flakes,” which arrived at the MICT in October 2018.

But inspections by Customs and environmental officials found the imported items were “misdeclared, heterogenous and injurious to public health.”

For its part, the Tagoloan Municipal Council passed a resolution “strongly condemning the importation of plastic mixed with hazardous waste materials from South Korea.”

Last Nov. 21, the Korean government said its ministry of environment started legal procedure to have the wastes brought back.