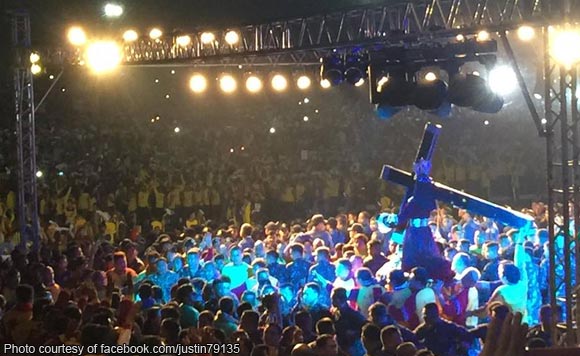 0 1,510
Share
Want more POLITIKO News? Get the latest newsfeed here. We publish dozens and dozens of politics-only news stories every hour. Click here to get to know more about your politiko - from trivial to crucial. it's our commitment to tell their stories. We follow your favorite POLITIKO like they are rockstars. If you are the politiko, always remember, your side is always our story. Read more. Find out more. Get the latest news here before it spreads on social media. Follow and bookmark this link. https://goo.gl/SvY8Kr

Organizers of the annual Black Nazarene feast have estimated over 21 million devotees to attend the 10-day celebration which started on Dec. 31, 2018 and will run until Jan. 9, the day of the “Traslacion” or the procession from Quirino Grandstand in Luneta to the Minor Basilica of the Black Nazarene (Quiapo Church) along Quezon Boulevard in Manila.

“As of last year we had 21 million from the start of the celebration up to end, based on data of government agency. Yearly we expect it to grow, more than 21 million, we are confident with that,” parochial vicar Fr. Danichi Hui said at a press briefing on Thursday.

The prelate also urged devotees, particularly those with health conditions, not to participate in the procession as they can just pray at the 14 prayer stations to be placed along the Traslacion route.

“Those with hypertension or heart ailment no need to participate in the procession. There will be prayer stations,” he said.

Hui added that every 6 p.m. from December 31 up to January 8, a novena will be held at the Quiapo Church.

At midnight of Jan. 8, the fiesta mass will be held at the Quirino Grandstand while a holy prayer will be held at 4 a.m., to be followed by the main event of the feast, the Traslacion.

“(At the) feast day (which is on) Jan. 9, may 14 prayer stations while waiting for the Traslacion to pass, to create prayer atmosphere and solemnity of the occasion,” the Quiapo official said.

On the other hand, Fr. Douglas Badong, also a parochial vicar, said that simultaneous processions will be held in different parts of the country.

He said that the areas that will also hold the procession of the Black Nazarene are Tagum, Davao; Catarman, Samar; Nueva Vizcaya, Palawan, Bicol, Cagayan de Oro and Batanes.

“First time sa (It will be held for the first time) in Batanes,” Badong noted, adding that the Traslacion will also be held in the United Arab Emirates. (PNA)