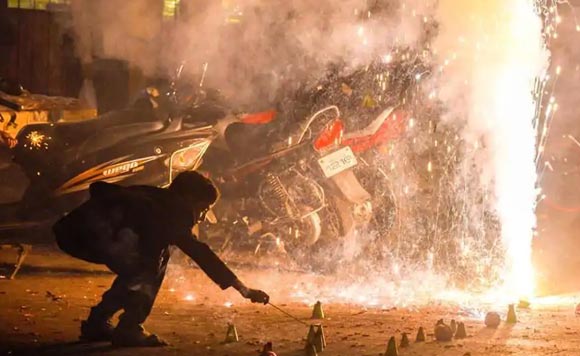 0 1,767
Share
Want more POLITIKO News? Get the latest newsfeed here. We publish dozens and dozens of politics-only news stories every hour. Click here to get to know more about your politiko - from trivial to crucial. it's our commitment to tell their stories. We follow your favorite POLITIKO like they are rockstars. If you are the politiko, always remember, your side is always our story. Read more. Find out more. Get the latest news here before it spreads on social media. Follow and bookmark this link. https://goo.gl/SvY8Kr

Eleazar said the designation of firecracker zones aims to reduce injuries and fire incidents caused by fireworks and firecrackers.

The designated firecracker zones are in compliance with President Rodrigo Duterte’s Executive Order No. 28, which bans private citizens from putting up their own fireworks displays or use firecrackers in their residences. This meant they could only light their firecrackers or watch firecrackers display in designated areas.

He said the designated areas are identified by the police, in coordination with the respective barangays and local government units.

Police assistance desks will be established in these areas and will be manned by PNP personnel, augmented by NCRPO force multipliers.

On the other hand, these are the pyrotechnic devices that can be used outside the firecracker zone:

The Metro Manila top cop also said there are 55 designated community fireworks display zones– 34 in QCPD, 12 in EPD, five in SPD and two each in MPD and NPD.

“These areas na hindi mo na kailangan magdala ng paputok and they were organized by the LGUs gagawin mo na lang manood(There is no need to bring firecrackers in these areas, what you only do is to watch),” he said.

Eleazar said that cities of Makati, Las Piñas, Muntinlupa, Marikina and municipality of Pateros have not released a designated firework display zones due to the strict implementation of their respective city ordinances.

“The NCRPO will work hand-in-hand with concerned government agencies to ensure safe and secured celebration of the coming holidays. Our people can rest assure of our continuous vigilance for their protection and security and that we will not allow anyone to disrupt the peaceful observance and celebration of the holiday season,” Eleazar said.

Eleazar also said the NCRPO is set to deploy almost 10,000 cops on New Year’s Eve with the aim of achieving a zero-casualty record in cases of indiscriminate firing of guns.

“So ang gagawin natin ngayon (what we will do now is) we maximize the deployment of troops from the [NCRPO] headquarters pati na sa(including at the) NHQ [National Headquarters in Camp Crame],” he said.

He ordered the cancellation of the rest and recreation and other leave applications of policemen and directed them to report for duty during the holidays.

“The concept is to deploy in areas where indiscriminate firing is prevalent or most common. If there were reports from nearest police station and gagawin ng police from the station ibabato ‘yung info dun sa mga naka-deploy na police na malapit sa area… through hot pursuit kung kinakailangan pasukin ang bahay without warrant ay papasukin namin ‘yung bahay para maaresto yung nagpaputok (the information will be relayed to police officers deployed in the area and if necessary — through hot pursuit — they go after the suspects even if they run into their homes and arrest them even without a warrant). That’s our warning,” Eleazar earlier said.

The most recent case of indiscriminate firing in Metro Manila involved a police officer assigned to the Navotas City Police Station.

PO1 Danilo Tiempo surrendered to Eleazar on Christmas Day, December 25, after he fired shots at a wake in Caloocan City which injured seven persons.

Eleazar called on the public to remain vigilant and promptly report if they witness any indiscriminate firing incident to the nearest police station or precinct.

“Appeal natin sa public is their vigilance, kung may nakita sila mga nag-iinuman at may nakita silang nakasukbit na baril or may naobserbahan sila o narinig na putok i-report kaagad nila sa nearest police station (We want to appeal to the public to be vigilant. If they see men having a drinking spree and one of them has gun in his waist, or hear gun shots, then report them immediately to the nearest police station),” Eleazar said. (PNA)