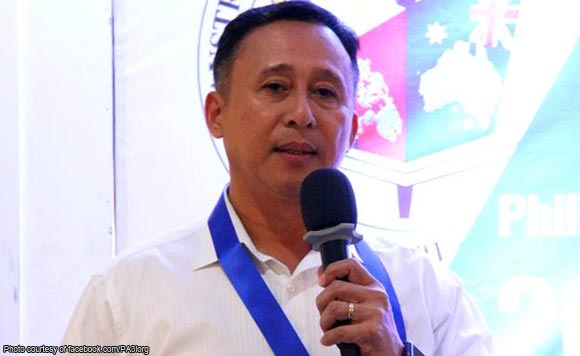 0 1,265
57
Want more POLITIKO News? Get the latest newsfeed here. We publish dozens and dozens of politics-only news stories every hour. Click here to get to know more about your politiko - from trivial to crucial. it's our commitment to tell their stories. We follow your favorite POLITIKO like they are rockstars. If you are the politiko, always remember, your side is always our story. Read more. Find out more. Get the latest news here before it spreads on social media. Follow and bookmark this link. https://goo.gl/SvY8Kr

Duterte made this announcement during the PAF change of command from Kintanar to Lt. Gen. Rozzano Briguez, held at the Villamor Air Base on Friday.

“I do not know Gen. Kintanar but I chose him to be the chairman of that board,” Duterte said in his speech.

“I know that he’s a general who chose to retire early. But sabi ko na, ‘Kailangan ko ng tao and I am eyeing you,” he added.

The President said he wanted a “clean” guy like Kintanar to ensure that funds from the PCA, referring to the coco levy funds, will be “distributed to the beneficiaries” without getting pocketed.

“If I look for somebody na talagang makita ko na ang pera ng Pilipino hindi mawawala, it should be the retired Gen. Kintanar,” he said.

Duterte also said that he might ask some officials of the PCA, which he said is “plagued with corruption” to resign because he is “not comfortable” with them.

He said Kintanar would be free to choose new officials to work with him.

However, Duterte acknowledged that it would be almost “impossible” to trace the beneficiaries of the coco levy fund.

“It would be nigh well impossible to trace those people, who they are and where they are now and whether or not they were really legitimate tenants or just an ordinary guy there in the barangay working for some odd jobs in places where the coconut industry was thriving,” Duterte said.

The passage of the coco levy fund measure is among the priority bills being pushed by the President.

The coco levy fund consisted of taxes imposed on coconut farmers’ products in the 1970s during the time of former President Ferdinand Marcos.

Under the proposed measure, the PCA will handle the fund, which consists of PHP76 billion in Treasury and escrow accounts and an estimated P30 billion in assets.

The Senate and House of Representatives have recently agreed on a unified version of their respective measures creating the P100-billion coco levy trust fund. (PNA)