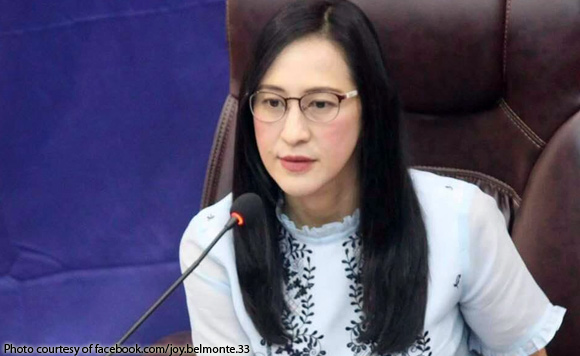 She took it as a signal for burning bridges.

Vice Mayor Joy Belmonte felt pained as she found out that she was not invited to a Christmas party hosted by Mayor Herbert Bautista for the third straight year, which also happens to be a tribute for the outgoing mayor of Quezon City.

Belmonte, clearly hurt, took to Facebook her feelings about the severed ties with Bautista, whom she has considered as a long-time ally starting with her dad, ex-Mayor now Congressman Sonny Belmonte.

“I felt a little sentimental when I heard I was left out again because this same time in 2009, I remember very distinctly that my father, then Mayor Sonny Belmonte, with a joyful heart, endorsed his Vice Mayor Herbert Bautista, to be the City’s next Mayor. And from then on, he instructed our machinery, our leaders, our supporters, to work tirelessly for Mayor Herbert’s success,” the politiko said as she traced the long-standing alliance of their family to Bistek.

“I was told that yesterday at his party the Mayor said he hoped all his Department Heads would be happy. I pray the Mayor himself is happy that he has decided to burn bridges with the family whose support and love was greatly instrumental in propelling him to the Mayorship. I pray he is happy that he has chosen to refrain from supporting me because I did not succeed in convincing his would-be political opponent to back out of the Third District’s congressional race, wherein he wanted to run unopposed. While I apologised to the good Mayor for my failure, I can only surmise he could not forgive me, hence the snub, hence the reneging on promises once made, hence the cutting of ties with my family.”

Belmonte even took it upon herself to say sorry as she tried to be civil.

“While I had done all I could do to mend our working relationship, i know that it takes two people to want to fix things for the sake of the City we both love, but in this case there was only me,” the politiko said.

“Merry Christmas, Mayor Herbert Bautista. May the next chapters of your life bring you much satisfaction. God bless you.”

Isko Moreno laments death of another Manila doctor due to…

Winnie Castelo has this guiding principle during pandemic